Focusing on prenatal and infant subjects, Lynn T. Singer is concerned with research in the following areas:

Begun in 1994, this research is a longitudinal investigation of prenatal cocaine exposure 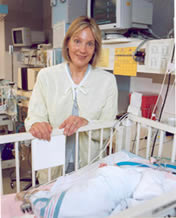 Significance:  Prenatal exposure to cocaine continues to be a significant societal problem especially in poor urban areas of the U.S. As there are few methodologically adequate, published follow-up studies beyond the neonatal and infancy period, outcome from four and six year, as well as emerging 9 year data, provides important new information.

Longer term follow-up through the adolescent period is necessary to assess persistence and significance of developmental abnormalities and sub-optimal caregiving environments.

This research is focused on the expanding population of very low birth weight (VLBW) children with BPD, and the long term outcomes of these children, or the adaptation of their families.

Significance:  There is a rapidly expanding population of very low birth weight (VLBW) children with Bronchopulmonary dysplasia (BPD); yet there is scant literature documenting the long-term outcomes of these children, or the adaptation of their families.

This study sample includes 3 groups of 14 year-old subjects with the first consisting of VLBW children with BPD, the second consisting of VLBW children without BPD, and a third control group of children born healthy full-term, all of whom have been followed since birth, and who did not differ at birth on confounding factors of race, socioeconomic status, gender or parental education.

This research aims to increase understanding of the long-term needs of children born prematurely both with and without BPD, as well as the long-term needs of their families. In addition it helps to identify risk factors for physical, psychological and educational difficulties, allowing professionals to create a supportive environment when working with these children and their families and enabling policy-makers to make evidence-based decisions in funding programs for them.

‌This research looks at the effects of fetal exposure to methylenedioxymethamphetamine (MDMA) commonly known as "ecstasy" and seeks to answer unresolved questions about its effects on humans.

Methylenedioxymethamphetamine (MDMA, "ecstasy") is the fastest growing drug used among young people in the United States. Despite an increasing body of empirical research, there are still many unresolved questions about its effects on humans.

In particular, preclinical studies suggest that fetal exposure to MDMA may have harmful effects on the developing child, yet there are no human studies to date which have developmentally followed MDMA exposed infants.

Building on an established partnership between Case Western Reserve University, and community research partners at the University of East London, England, the study will continue to follow-up a cohort of MDMA, polydrug exposed children prospectively enrolled prenatally and seen through two-years of age in the United Kingdom.

Approximately 99 women, (33 MDMA users and 66 non-users) and their children will be seen through 2 years. MDMA and other drug exposures were determined by maternal self-report and frequency assessed at each trimester through clinical interview and hair analysis. Standardized questionnaires and assessment measuring maternal psychological status, personality, social supports, attention, neuropsychological functioning, and caregiver behaviors will be administered, at follow-up and children will be assessed on standardized and experimental measures of growth, cognitive, motor, language, and behavioral outcomes annually.

Data will be evaluated descriptively, and through a series of longitudinal mixed model, hierarchical multiple/logistic regression analyses, to describe the functioning of MDMA-exposed children and their mothers, and the relative impact of MDMA and other substance exposures on child outcomes, maternal psychological and neuropsychological functioning, and caregiver interactions. Changes over time and predictive models of infant risk, using HLM or structural equation models, will be utilized. The proposed research will provide information about the early developmental sequelae of fetal MDMA/polydrug-exposure, maternal psychological status and caregiving behaviors which can guide the design of effective maternal drug treatment and child intervention programs.