Indigeneity and Disability: Futures of Personhood, Care and Consent

What dreams for the world whisper through the cracks of this world that is breaking? This panel brings together the breadth and depth of five influential scholars, artists, cultural/political organizers and researchers to delve into how the embodied realities and analytics of both indigeneity and disability open political, cultural, medical and spiritual imaginaries about body, land, practices of care and consent. With Ella Callow, Jen Deerinwater, Juliet McMullin, AM Kanngieser, and Petra Kuppers, facilitated by Marina Tsaplina.

Live CART and ASL interpretation will be provided. 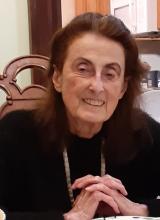 Barbara Alice Mann, is a Ph.D. scholar and Professor in the Honors College of the University of Toledo, in Toledo, Ohio, USA. She has authored fifteen books, the latest of which are President by Massacre: Indian-Killing for Political Gain (2019) and Spirits of Blood, Spirits of Breath: The Twinned Cosmos of Indigenous America (2016). Other works include The Tainted Gift (2009), on the deliberate spread of disease to Natives by settlers as a land-clearing tactic. Dr. Mann is currently working on an international project examining historical massacres, around the world 1780–1820, and is participating in a book project on that. Her internationally noted Iroquoian Women: The Gantowisas (2001, 2004, 2006) is in its third printing. Two other internationally known books include George Washington’s War on Native America (2005, 2007), Daughters of Mother Earth (2006, out in paperback as Make a Beautiful Way, 2008). She lives in her homeland and works for the rights of the people indigenous to Ohio, living in Ohio. (“Ohio” is a Seneca word meaning “Beautiful River,” a spiritual designation.) An Ohio Bear Clan Seneca, with community recognition, she was for twenty years the Speaker and/or Northern Director of the Native American Alliance of Ohio.

Ella Callow has had a long history of advocacy as an attorney for the rights of disabled people before joining UC Berkeley. Ella is open about having disabilities herself and as a member of the Bay Area American Indian/Alaskan Native community, her understanding of disability in the United States is as an identity that is deeply intersectional with race, class, gender, sexuality, and educational privilege. Ella is responsible for coordinating and leading efforts to ensure that the campus is in full compliance with the ADA, other applicable disability-related laws and all university policies related to disability.

Jen Deerinwater is a citizen of the Cherokee Nation of Oklahoma, bisexual, Two Spirit, multiply-disabled journalist, speaker and organizer who covers the issues hir communities face with an intersectional lens. She’s a contributor at Truthout, a Disability Futures fellow, and the founding executive director of Crushing Colonialism. Jen is the co-editor of Sacred and Subversive and hir work is included in the anthologies Disability Visibility and Two-Spirits Belong Here. Jen has been interviewed for numerous outlets on hir work and The Advocate named hir a 2019 Champion of Pride.

Juliet McMullin specializes in Cultural and Medical Anthropology. Professor McMullin is concerned with the production and organization of medical knowledge as they are created and constrained within a political economy of health. Her work falls into three intersecting categories: 1) the role of narrative in knowledge production, 2) health inequalities, and 3) community-engaged research and the inclusion of multiple voices in the practice of anti-oppressive research. Her current projects include the engaging community in creating comics around their cancer narratives, building a historical trauma curriculum for health care providers who serve Native Americans.

AM Kanngieser is a disabled geographer and sound artist, working with listening to think more closely with/in the entanglements of people, time and ecologies. They are the author of Experimental Politics and the Making of Worlds (2013) and Between Sound and Silence: Listening toward Environmental Justice (forthcoming). Their audio work has been featured on Documenta 14 Radio, BBC 3, ABC Radio National, The Natural History Museum London, Arts Centre Melbourne, Radio del Museo Reina Sofía and Deutschland Radio, amongst others.

Petra Kuppers is a German disability culture activist and community performance artist who lives on Anishinaabe land in Michigan. She creates participatory community performance environments that think/feel into public space, tenderness, access and experimentation.  Petra has received the American Society for Theatre Research’s best dance/theatre book award, the National Women’s Caucus for the Arts’ Award for Arts and Activism, and her collection Gut Botany (2020) was named one of the top ten US poetry books by the New York Public Library. She teaches at the University of Michigan, Ann Arbor, and on the low-residency MFA in Interdisciplinary Arts at Goddard College.

Marina Tsaplina is a Russian-born disability artist, health humanities scholar, and disability advocate. Through puppetry animation and poetic scholarship, she creates participatory spaces to help awaken the deep connections between land, body, imagination and healing. She co-founded the Reimagine Medicine program at Duke University, was a Kienle Scholar in the Medical Humanities at the Penn State College of Medicine, and is an associate of Duke's Health Humanities Lab. She tours her performance work across Turtle Island (United States) and joins her research and teaching in training medical students and clinicians on embodiment and disability through embodied arts pedagogy.

This event is co- sponsored the Case Western Reserve University Department of Bioethics, the Baker-Nord Center for the Humanities, and the Graduate Student Council.