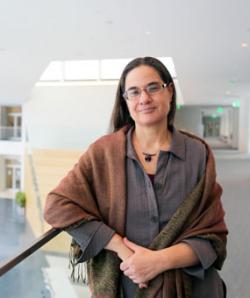 Lisa Nielson is an historical musicologist with a specialization in women’s studies. Her research focuses on the intersections of gender, slavery, sexuality and music in the medieval Islamicate courts. She has a background in LGBTQ and pro-choice activism, non-western feminisms and taxonomies of gender, and dedicated to creating safe, open environments to foster community and dialogue for people of all gender identities and orientations.

Since 2011, she has had the honor of being the first Anisfield-Wolf SAGES Fellow and appointed as a Lecturer in Music at Case Western Reserve University. She teaches classes related to the mission of the Anisfield-Wolf Book Awards of fostering cultural tolerance and diversity as well as her own research. Among her courses are a class on the courtesan, the harem, world slavery, how ancient and medieval science defined humanity and difference, and a class dedicated solely to the Anisfield-Wolf Book Awards. She is also involved in Sustained Dialogue, a student facilitator for Diversity 360, the advisor for several student organizations, and facilitates an ad hoc discussion group that was started by her students. Dr. Nielson received the Richard A. Bloom, MD Award for Distinguished Teaching in the SAGES Program in 2012, the Carl F. Wittke Award for Excellence in Undergraduate Teaching in 2014, and the J. Bruce Jackson, MD, Award for Excellence in Undergraduate Mentoring in 2016.

In addition to teaching, Dr. Nielson regularly presents at national and international conferences, and was a 2016-2017 recipient of a Balzan International Musicology Visitorship.  She spent the summer of 2016 conducting research at the national Library of Israel in Jerusalem, Israel, and convened a panel as well as presented the preliminary findings of that project at a seminar at Oxford in November, 2016. Nielson has published in Early Music History, has an article forthcoming in an essay collection to be published by Oxford University Press, and contributed reviews and opinion pieces to the Journal of the Society for American Music and the Anisfield-Wolf Book awards blog. She is currently working on her book, Music and Musicians in the Medieval Islamic World: A Social and Cultural History, to be published by IB Tauris. Her professional memberships include the Middle East Studies Association, the American Musicological Society, and the Middle Medievalists.