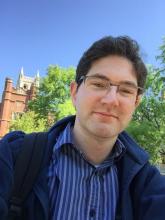 Aaron Manela holds a B.A. in physics and music from Brandeis University, where he studied French Horn and voice. After graduating in 1996, he began an ongoing secondary career in educational software development. He pursued graduate studies in music composition at the University of Oregon from 2005 through 2009, and received an M.A. in Musicology from the University of Oregon in 20l1. His thesis, “Arthur Saint-Léon’s The Little Humpbacked Horse in Context,” explored the ways in which music and dance illustrate the conceptual basis for who is—and is not—Russian in this 1864 ballet. Aaron is a Ph.D. candidate here at Case Western Reserve University, where he continues to study the intersection of music and identity construction across multiple historical eras. In 2015, Aaron received the Graduate Dean’s Instructional Excellence Award.

Aaron has given papers at national and international conferences, including: