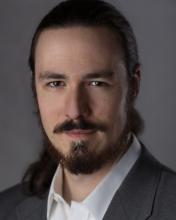 In previous summers he was a Studio Artist with Central City Opera, and a Young Artist at the Boston Early Music Festival. Last summer he sang Pretore in Rossini’s La gazza ladra with Teatro Nuovo, and hopes to return there next summer, pending the coronavirus situation, to cover Maometto II in Rossini’s Maometto Secondo. He regularly sings with the Apollo’s Fire Singers, as well as concertizing with Musical Upcoming Stars in the Classics.