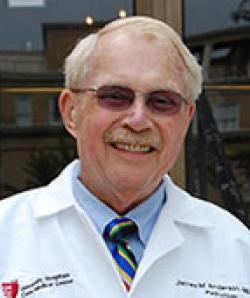 Dr. Anderson has worked in the area of biomaterials, medical devices, and prostheses for the past 40 years and his current activities range from the clinical pathology evaluation of retrieved implants from humans to fundamental studies of cellular interactions with biomaterials.

Dr. Anderson is the recipient of a NIH MERIT (Method to Extend Research In Time) Award (1993 to 2003). He is a founding member of the Society for Biomaterials and the Controlled Release Society and serves as a consultant to the National Institutes of Health Artificial Heart Program, the Food and Drug Administration, and the International Standards Organization where he is the Co-Chair of Working Group 1 for the development of the ISO Standard on Biological Evaluation of Medical Devices, ISO 10993. He is the Editor-in-Chief of the Journal of Biomedical Materials Research. In 2003, he was elected to the Institute of Medicine of the National Academies of Science. In 2005, Dr. Anderson received the Elsevier Biomaterials Gold Medal Award given to the individual who has made the most significant contributions to biomaterials science over the 25 year period from 1980 to 2005. He received this award at the Tissue Engineering Science International Conference held in Shanghai, China, in October of 2005. Dr. Anderson is the recipient of the 2006 Chugai Mentoring Award given by the American Society for Investigative Pathology to senior investigators who have distinguished their careers with a dedication to mentoring and education. In 2006, Dr. Anderson was awarded the Honoris Causa Degree (honorary Doctorate of Philosophy Degree) by the University of Geneva, Switzerland.

Our research efforts are centered around the development of a better understanding of blood and tissue/material interactions as they relate to implantable devices and biomaterials. The overall focus of our efforts is on the cellular and humoral responses to implanted materials. Studies currently ongoing include an analysis of the wound healing response to vascular graft materials, in vivo biocompatibility testing with the focus on macrophage and foreign body giant cell adhesion and activation, and a determination of those factors which lead to the biodegradation of biomaterials. In addition, we are investigating human blood/material interactions using an in vitro system and interrelating variations in protein adsorption, cellular components, coagulation parameters, platelet activation and release, and complement activation.