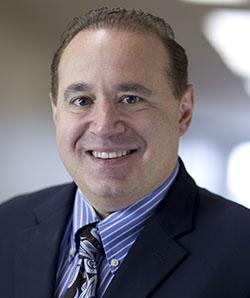 Mitchell Machtay is an academic radiation oncologist who has dedicated his professional life to advancing the treatment of locally advanced solid tumors. Dr. Machtay has made significant contributions in clinical care, teaching and research.  His primary interest is in combined modality therapy (using advanced radiation technology and novel systemic therapies) for several types of cancers, particularly lung cancer and head and neck cancer.  For example, Dr. Machtay was one of a small group of very early investigators studying definitive radiotherapy with paclitaxel in these diseases. He has led as PI/co-PI or as key personnel in numerous investigator-initiated prospective clinical trials, including one of the first studies to combine thoracic radiotherapy with carboplatin/pemetrexed – this included efforts at dose-dense scheduling, and documented the excellent tolerance and encouraging outcomes from this combination.

In addition to his early phase, single-institutional clinical research, Dr. Machtay has had many leadership roles in the U.S. cooperative group system (now the National Clinical Trials Network), including serving as institutional PI for Main Member Institutions of the Radiation Therapy Oncology Group (RTOG). Dr. Machtay has served on numerous studies and committees for the RTOG, and in 2000 became the RTOG Deputy Chair  (Executive Officer, reporting to the Group Chair, and responsible for leadership in protocol development, conduct and analysis). Dr. Machtay's role evolved as RTOG joined with NSABP and GOG to form NRG Oncology, the largest of the NCTN Group Operations Centers. Dr. Machtay is the NRG Deputy Chair for Research Strategy. The primary mission and goal of NRG Oncology is to improve the survival and quality of life of patients with malignant solid tumors, through late-stage (phase III and large phase II) clinical trials, setting the standard of care.

Dr. Machtay views one of his own important goals as to identify promising regimens from phase I clinical trials (whether from the radiation oncology community or the developmental therapeutics/medical oncology sphere) that may be appropriate for promotion into the NCTN system as larger trials. Dr. Machtay has led many such small to moderate sized trials both as single center and multicenter efforts. I have mentored and continue to co-mentor (with other senior faculty members) many trainees and junior faculty members in this complex process of developmental therapeutics from phase I to phase III.  This is an important aspect of his current role as PI of the Case Western Reserve University U10 grant as a Lead Academic Participating Site of the National Clinical Trials Network, as Department Chair of Radiation Oncology at Case-Western and University Hospitals, and as Associate Director for Clinical Research at the Case Comprehensive Cancer Center.