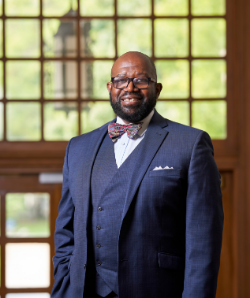 Robert L. Solomon, Esq. is a graduate of Lipscomb University in Nashville, TN, and The Ohio State University Moritz College of Law. He began his career as an assistant attorney general for the state of Ohio. He also served as a Franklin County municipal court magistrate before joining The Ohio State University Moritz College of Law to work in administration. During his tenure at the Moritz College of Law, he served as assistant to the dean, director of the Moot Court and Lawyering Skills Program, assistant dean for Admission & Financial Aid, an advisor to the Black Law Student Association & Asian Pacific American Law Student Association and as an adjunct professor focusing on Evidence, Trial Advocacy and Appellate Advocacy.

In 1999, he left the university to work as an assistant United States attorney for the Department of Justice. In 2001, he returned to Moritz College of Law to resume his duties as senior assistant dean for Admission and Financial Aid and to head the Office of Diversity & Inclusion within the law school as its founding director and law school chief diversity officer. In 2015, he became assistant vice provost for The Ohio State University’s Office of Diversity and Inclusion. In 2020, he was appointed vice president for the Office for Inclusion, Diversity and Equal Opportunity at Case Western Reserve University.

Solomon has been active in the community, serving on various boards through the years, including the Equal Justice Foundation, the Columbus Academy, Mansion Day School and Ohio Valley University. He has been an active volunteer with the Law School Admission Council, including service on the Board of Trustees, the Misconduct & Irregularities in Admission Sub-committee, Finance & Legal Affairs Committee, Diversity Committee and the 2011 Annual Meeting Planning Committee. He served on the Diversity Committee of the American Bar Association. Solomon was active in the Columbus Bar as well, having served as chair of the Law School Liaison Committee for the Columbus Bar Association, the Long Range Planning Committee and the Minority Clerkship Task Force. He has served on the Executive Board of the John Mercer Langston Bar Association (the Columbus National Bar Association chapter) as Parliamentarian, chair of Professional Development Committee, and as president.

Solomon is a President Emeritus of 100 Black Men of Central Ohio and is a Board Chair Emeritus of the Africentric Personal Development Shop. His past honors have included being appointed by former Ohio Governor Ted Strickland to serve on the Ohio Ethics Commission in 2010, selected by Congress to represent the District at the 2006 National African American Leadership Summit in Washington, D.C., recipient of the National Hispanic Bar Association Region X President’s Award (2015) and the George V. Voinovich Public Service Award from The Ohio State University Moritz College of Law (2016).