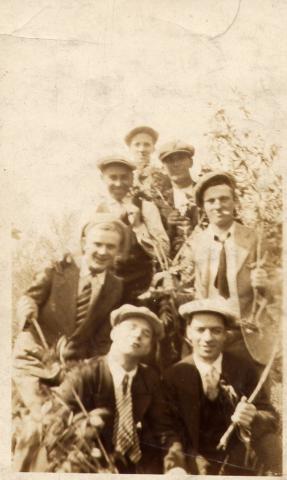 No – that’s not a misspelling in the title for this posting.  There once was a body of water called the “Dog Pond” in Cleveland. How do I know?   Well, my father told me.  According to him it was where he “hung out” in his early years.  It was supposedly located somewhere close to where the FERRO CORP. is now situated beside the WILLOW FREEWAY and, in all likelihood, it disappeared either when Ferro expanded or the freeway was constructed.  Those questions aside, I know it was a special place for him and I guess for me as well, given that his stories of the pond, and other places that shaped his life, entranced me and helped make me an historian.  I remain curious about those places and I would love, someday, to find out exactly where the pond was located (and I am relatively certain that someone in the ECH audience knows!) But then, another question looms –does it deserve a place in Cleveland’s history or should it remain a memory to be passed along from generation to generation? That’s a big question, particularly for an on-line publication such as the Encyclopedia of Cleveland History.  Which of our personal memories are truly historical and, dare I say, of lasting consequence?

Today, the “history business” is increasingly driven by memory and what some call “nostalgia” – per Merriam-Webster: “1: the state of being homesick : HOMESICKNESS or  2: a wistful or excessively sentimental yearning for return to or of some past period or irrecoverable condition.”   Smart museums, for example, know that certain objects and topics appeal to a particular generation.  Nostalgia drives visitation and, of course, income.  Why, for an example, should an auto museum focus on early cars from the brass era when those born in the years just after WWII really wish to see the cars they owned or lusted for when they came of age?  So muscle cars are the rage and, aha, that age cohort is now (generally) an audience of means.  If you’ve watched public TV over, let’s say, the past forty years, you’ve seen the music retrospectives aired on pledge week move from Big Band, to early 50’s R&B, and to the protest, acid rock, and folk music of the ‘60s. And that creates a generational memory connection to the station.  “Retro” sells, particularly when it connects with those memories that give us comfort and allow us to retreat to times and events that balm the challenges of the present. Of course, a focus on the warm and fuzzy within a museum can also serve as a hook to bring visitors in contact with histories on display that are less attractive and more challenging.  So, there’s an important duality here.

Is this a pattern the ECH should pursue – would more “dog ponds” or “Dawg Pounds” attract more readers?  That might be a good idea given that the ECH strives to connect with the largest readership possible. But there are limits to how much “memory’ the ECH can accommodate – not because of space constraints, but rather a consequence of purpose and mission.

The concept of early encyclopedias rested on providing the information that any “learned person” should know – this being very much an Enlightenment project, but one with roots going back to classical Greece (thanks here to Ryan Chamberlain and his dissertation work!).   So, there’s a matter of authority here (or should I say “elitism”?).  Who makes the choice?  What should a “learned” person know?

One could see that very selective barrier of historical inclusion created by those with “authority” open a bit during the 1930s when the WPA produced guides to states and cities (yes there is an unpublished text for a guide to Cleveland) that moved beyond the usual “must sees” in a particular area.  At that time Carl Becker, president of the American Historical Association gave an address, “Everyman His Own Historian” which suggested a more inclusive view of the past.  And, with the arrival of the new social history of the 1960s that wider view of what is truly historical moved more fully into the academy where the canons of inclusion and exclusion underwent tectonic shifts.   The ECH is a product of this era and that’s why DAVID VAN TASSEL envisioned it (as noted in my previous posting) as a project linking the community and the academy.  Yet, any suggestion for an entry in the ECH needed to prove its historical worth.  At that time, as a book limited to the space between two covers, someone had to mind the gate.

That, of course, begs the question of what is truly of historical consequence?  To put it simply for the ECH, what events, institutions, and individuals have, over time, shaped the history of the city? Who might have been recognized as a change agent by her/his peers regardless of whether or not they were ensconced in a particular hall of fame (football or otherwise) or whether or not they held positions of power and authority in one of Cleveland’s neighborhoods? Similar criteria needed to be met for institutions.  Beyond longevity and innovative products/services, what else might make a business or service organization a factor in our overall history?

These criteria have been, and continue to be malleable over time, particularly as we become increasingly aware of the diversity of forces that have shaped our city and our nation.   Yet, there is a counter force suggesting a broader inclusivity, a temptation if you will, to include everything that we communally remember and which we can verify.  The ECH, like all other similar on-line resources is no longer confined to the space within a book.  So, why not include a restaurant that was fondly remembered?  Why not include canines other than BALTO the sled dog?   And why not a heavy metal band that played a few gigs here and there and maybe even made it to the AGORA?  In a city of neighborhoods, every local movie theater created memories, as did the individual businesses along streets like St. Clair, West 25th, and Fleet.   Certainly the ECH is open for suggestions of “memorable” people and places, and we have good cadre of associate topical editors who can judge whether suggestions for such new entries move beyond nostalgia into the realm of historical consequence.  And that’s the key – that which we remember is critical to each of us, but does it in any way transcend the personal?  What can it tell us about the evolution of a city and region that a community of individuals with memories, both of the good and bad, has shaped?  How does something stand out from the crowd?  It’s not an easy task, but a necessary one so we can keep on focus.

That brings me back to the Dog Pond (and to the end of a very long post).  Perhaps it was part of the lost waterways of our area – those that have been filled in or culverted.   It could possibly have been associated with Burke Run, a tributary to the CUYAHOGA RIVER which ran through Slavic Village and which now is largely culverted.  That might give it some historical relevance.  Or, perhaps it was simply a rain filled pool in a depression or a former quarry or clay pit.  At this point, I’ll settle on personally owning the pond.  It’s one of those memories that helps make someone curious about the past, but at this time, not something that will find its way into the ECH – other than in the editor’s somewhat privileged blog.