Previous blogs from the Editor's Corner

Forty Years of Partnership. We are All in this Together

Well, it’s another journey back to the beginning of the Encyclopedia -- and a trip that does raise some questions.   One of the factors that made the ECH possible was the incredible set of archival resources relating to Greater Cleveland available at the time (1980-1987) the first volume was compiled. That was important because DAVID VAN TASSEL was adamant that research, whenever possible, was to be based on original sources.    Frankly, that mission would have been impossible had the ECH been envisioned and begun some 20 years earlier, as prior to that time local archives generally focused on a distant past, with little inclusion of individuals who were not white or “famous.”   The selection of sources at hand during the creation of the first printed ECH was far more equitable, but, given today’s perspective, still not equitable enough.

Fortunately, the archival world, both local and national, began to change in the 1960s.  Local archives, most particularly those housed at the WESTERN RESERVE HISTORICAL SOCIETY began to respond to the revolution occurring in the historical profession, moving away from a focus on the great and powerful, and beginning to acquire collections relating to the new social history.   Prior to that time researchers sought out the records of the African American and immigrant communities at their point of origin, or in collections at various ETHNIC LIBRARIES, or archives built by individuals who were concerned about the preservation of their heritage.   Cleveland had a number of ethnic libraries as well as committed individuals such as ICHABOD FLEWELLEN and FRANK BARDOUN who respectively collected and preserved materials relating to the African-American and Czech communities. 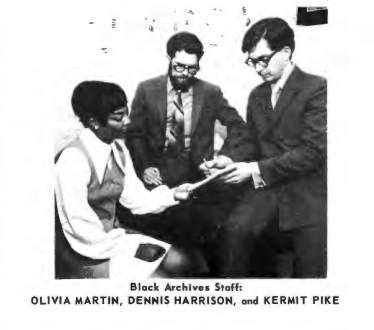 From the Ohio Archivist, Fall 1970

The Historical Society began a Black History Archives Program in 1970 and a Cleveland Regional Ethnic History Archives program the following year. Several years later it joined in a statewide effort to collect and preserve materials relating to labor history.   Certainly it had held collections in these areas prior to that time, most notably a substantial collection of material relating to the national and local abolitionist and anti-slavery movements. Interestingly, that body of material helped argue for the funding and creation of the Black history program in 1970 and it, as well as the ethnic program, rested on working with and consulting with the African-American and various ethnic communities, and particularly those in the communities who had already seen the value of preserving documents, photos, and newspapers.   It was a cosmic shift for WRHS and for similar institutions in the area and the nation. Later the Society would go on to create a pioneer LGBTQ archival collection.

It was this growing body of material that allowed researchers for the ECH to include entries on individuals and organizations that simply would have been “off the radar” years earlier.   Frankly, it felt good to shift the historical perspective.    And that’s something the ECH continues to strive for. However, the process has become more complex because there are serious questions about the “construction” of an archive as well as multiple new sources to consider.  But even as we move to make the archive even more equitable, there are wider, problematic issues that complicate the process.

No matter what the topical focus – be it gender, the counter-culture, sports, or entrepreneurship, the traditional archive is always compromised.   It is selective from the very beginning - - who writes and creates,  and then leaves a paper trail,  or whom do we choose to interview and what questions do we choose to ask?  And then it moves to survival of the “record” (what is kept, what is destroyed or lost), and ultimately comes down to the selective view of a curator or archivist who “thumbs up” allows it into the collection, or “thumbs down” denies it survival as an accessible source.  It’s a combination of serendipitous events and human choice that shape the archive.

And then, there are multiple complexities that follow upon acceptance by an archive.  What tags does a cataloger assign to it?  What the cataloger sees is, essentially, what the record will reflect and therefore what the researcher will find when reviewing the catalog records.  When the history of childhood became a major academic focus, WRHS had to re-evaluate numerous collections to see if they fit the topic. Many did, but had never been cataloged to reflect upon their potential importance to the study of childhood. But, more importantly, there are the records that have been accepted into collections but are not yet cataloged.  Many archives are faced with substantial backlogs of paper records, materials that exist in an archive and remain unprocessed/uncataloged, and therefore more difficult to discover.

Let me not stay stuck in the past lane (I do have a propensity for that at times).   There has obviously been a a good, cosmic shift in “archives” since the 1960s. Today, the digital revolution is well underway and it is affecting the archive in multiple ways.   Much of what is created now is "born-digital" and many older collections are being digitized and made widely accessible.   That’s wonderful because you and I can now sit at home during this time of Covid 19 and access collections from around the world, as well as amazing scholarship that is on-line.  Yes, but – we need to remember that the majority of “paper-born” material in an archive remains unscanned, and frankly may linger as “paper only” for decades.  This, of course, begs the question of why and how collections are prioritized for scanning.  And that question opens up yet another query – what do foundations and donors agree to fund and why?  Think about that for a while.

But then, who needs a foundation or a formal archive when anyone with a scanner can create an on-line archive and choose to place digitally created records on-line?   And, anyone with access to a “device” can create a blog or newsletter.    In this sense alone, perhaps are we coming close to achieving “archival equity” – at least for those who can afford the computer and a connection.

Sounds complex and a bit troubling doesn’t it? Or maybe it’s just too much navel gazing on my part.   It is a concern, but it is also an opportunity for the ECH because now we have more access to more sources than ever before and, if we carefully vet the sources at hand – those in traditional archives and those that have appeared independent of an archive , we have an opportunity to greatly expand the scope of the work.

Given its structure, the ECH is in an excellent position to do this.   It remains an academic operation, but it is open to multiple voices and its content reflects multiple levels of review.   Unlike Wikipedia, it is open to to the use of unpublished primary sources and to current scholarship that has not yet been published.

The history of this project says much about what it was and it also opens up thoughts about what it can and will be.  It started by engaging with the community for ideas about content and for volunteers to produce that content.  That was at an exciting time when archives were building new and more diverse collections.   At the same time it represented an “academy” that was really at the cutting edge of building a more-inclusive and more “curious” inquiry into the past.

These factors remain today and our ability to widen content has never been more opportune.  There are voices that we’ve not been able to hear before, and stories, if verified, that can make the content of the ECH richer and more inclusive, provided we can judge, as I noted in my previous blog “what can [those voices and sources] tell us about the evolution of a city and region that a community of individuals with memories, both of the good and the bad, has shaped?  How does something stand out from the crowd?"   Frankly, vetted on-line sources have been critical to the updating and creation of new articles in the ECH over the past several years  and they will become increasingly more important in the future.  And via our on-line feedback mechanism, people have let us know when we have gotten something wrong or if we have “missed” an important entry.

I’ll close by returning to the Dog Pond, the lead-in for my last blog.   I think I found it and, if so, it certainly wasn't anywhere near where I thought it might be.   It may have been the stub of the old OHIO AND ERIE CANAL near the repositioned weigh lock near Dille and Independence roads, a place where many immigrant CZECHS would board canal boats for rural excursions into the Cuyahoga Valley in the years before the canal closed in 1913.    If so, then this opens the question as to how my father recalled (or mistakenly recalled) where it was -- I could swear he indicated it was near the Ferro Plant. Or maybe, I've just not remembered exactly what he said. So much for memory. I guess it's time to really dig into the archives.