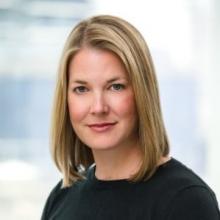 Girvin was the unit chief overseeing business, technology and media coverage for NBC News and MSNBC. She led a team of two dozen reporters, producers, writers and researchers in three news bureaus across the country. They covered everything from Russian Twitter trolls and big pharma to tax reform and trade wars for all broadcast, cable, digital, social media and OTT platforms in the NBC News portfolio.

Prior to NBC News, Girvin led the three show teams that produced the daytime coverage on Bloomberg Television, and redesigned and re-launched the seven-hour market day programming. Before joining Bloomberg, she was part of the original team to launch The Huffington Post’s groundbreaking online network "HuffPost Live." In her three years at HPL, her team interviewed 25,000 people from 100 countries and garnered two billion video views.

Prior to joining "HuffPost Live," Girvin spent more than 10 years at ABC News in New York in a variety of roles from assignment editor to field producer.  She has interviewed everyone from presidents and royalty to astronauts in space and the world champion yodeler. She spent the bulk of her time at "Good Morning America," where she served three years as head writer for Diane Sawyer and Robin Roberts. Girvin’s last role at ABC News was running the early morning news division where she oversaw "World News Now" and "America This Morning." While at ABC News, Girvin was part of the team honored with an Emmy Award for the 2008 election coverage and an Edward R. Murrow Award for the breaking news coverage of the death of Osama Bin Laden.

Girvin began her career at local news stations in North Carolina and Tennessee.

Girvin is a passionate advocate of women prisoners and served as the chairwoman of the junior board of the Women’s Prison Association, which focuses on helping ex-offenders reenter society.  She is a frequent guest lecturer on new media and women in leadership and has spoken at numerous conferences and universities.

Girvin has a Master of Science in Magazine Writing from Columbia University and a Bachelor of Journalism in Broadcast News from the University of Missouri. In 2013, the Mizzou Alumni Association honored Girvin with its “Emerging Leader Award.”

Girvin is a native of San Diego, California.