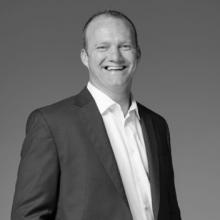 Prior to joining Wave, Matt was the vice president of strategic partnerships at BioEnterprise, where he oversaw the continued development, promotion and execution of promising healthcare innovation in the thriving biomedical sector in Northeast Ohio. McBride began his career in healthcare innovation at Cleveland Clinic Innovations (CCI), where he spent seven years, translating medical breakthroughs into patient-benefiting products that reached the commercial market. As the director of inventor services, McBride established and implemented a process that was used to evaluate early-stage technologies and usher them toward a commercial outcome. At CCI, McBride also held the position of director of business development, where he aided start-ups with IP strategy formulation, product development guidance and value proposition refinement.

McBride also served as a naval officer at several commands throughout the world. As a naval officer, he served as executive officer of the military sealift command in Diego Garcia, program manager for the V-22 Osprey in Philadelphia and contract administrator for Forward Operating Base, Camp Leatherneck, in Afghanistan.

McBride also serves as president on the board of directors for Challenge America and a trustee of NE Ohio Naval Academy Association.

McBride received a Bachelor of Science in Political Science with a focus in engineering, math and science from the United States Naval Academy and an MBA from Case Western Reserve University.