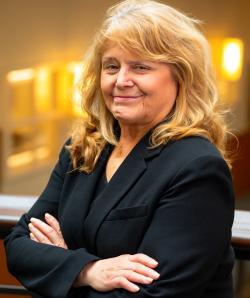 Dot joined the Office of General Counsel in 2004.  She previously supported five faculty members at the Law School.

Outside the office, Dot is an activist who marches for human rights, including Cuyahoga County jail reform, immigration reform, refugee's rights, and women's issues.  She has served as a Girl Scout leader, a volunteer at food kitchens, and continues her cognizance and education by attending classes, workshops, and lectures.  As a community programmer at the university-owned radio stations, WRUW FM 91.1, Dot is the host of Voices and Choices every Tuesday at 6:00 PM.