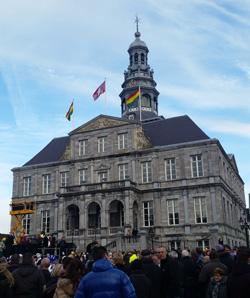 Where did you study abroad and how did you choose your program?
I studied abroad at Maastricht University in The Netherlands. I found out about this program through my fabulous study abroad advisor Autumn Beechler. I had met with her a couple of times to go over potential choices, so she had a pretty good idea of what type of program I wanted. I was originally hoping to study in Geneva, Switzerland but alas the program offered there did not fit my major. However, Autumn worked her magic and recommended Maastricht to me because she knew I wanted somewhere centrally located in Europe where I would have opportunities to practice my French. Maastricht offered me both, being less than 2 hours from French-speaking Brussels, Belgium and having a close proximity to the German and Belgian borders.

How has studying abroad changed your global perspective?
I would say that it made me more aware of the United States' influence in the world. I am still blown away by how much international students knew about my home state of Ohio—whether through its status as swing state during presidential elections or through the popularity of LeBron James.

Additionally, studying abroad also helped me conclude that although the world is so diverse, there are many similarities that its citizens and countries share. By far, one of the best parts of my experience was meeting and connecting with international students and hearing their opinions on world issues.

How did your classes abroad differ from your classes at CWRU?
The classes I took abroad were quite different than ones I would normally take at CWRU. Maastricht has a wide variety of courses, so it was really nice taking things I wouldn't have had the opportunity to take otherwise.

Also, Maastricht University runs on a system called PBL (problem-based learning) which essentially is designed to limit unnecessary input from the professors. The tutorials are very student driven, with a discussion leader who navigates the class through the topic for that day's class. This facilitates more student interaction and input while also allowing the class to bond together. I really enjoyed this system but it also required you to keep up with your reading for classes are small, making it hard to rely on others around you if you didn't read the material.

Additionally, at Maastricht, classes only last for eight weeks compared to 15 at CWRU. This equates to the final grade being reliant normally on a single paper and exam, so it was paramount for one to perform well on these assignments because there really wasn't time to make up for a poor grade.

What was one thing that you did abroad that you wouldn't have been able to do in Cleveland?
Being able to travel almost every weekend was definitely the highlight of my study abroad experience. Almost every student at Maastricht has three-day weekends, so it was very easy to hop on a train to Belgium, Germany, or somewhere else in The Netherlands. One is also very close to the Brussels International Airport, making long distance travel very feasible and inexpensive if you planned in advance. I will never forget how I was able to spend a week in Spain in February after being in class for only two weeks. This is something that never would have occurred at CWRU.

What places are next on your bucket list?
I would love to do a Swiss-Italian trip at some point. I got to visit Rome and Zurich but I would still love to see Central and Western Switzerland like Bern, Basel, Geneva and Lausanne and visit Northern Italy like Pisa, Torino, Milan, Florence and Venice. A lot of my friends from Maastricht went to Italy during their semester abroad, and I became so jealous from seeing their pictures. Also, I just really like Switzerland, especially after writing a paper about its lack of EU membership.

What CWRU classes have you taken that have widened your global perspective?
I took ANTH 102: Introduction to Cultural Anthropology with Dr. Katia Almeida my freshman year at CWRU. I really loved this class not only because Katia is an amazing professor but also because the topics we discussed were so interesting. In this course, I learned to look at my own cultural rituals as strange and to look at other cultures that are different from mine holistically—truly examining the purpose behind the practice and not judging it merely on the surface. Tools like this are invaluable in an international environment because everyone has a different way of doing and thinking about things, and this doesn't make them better or worse.

Also, I loved my European Union politics course that I took my sophomore year with Dr. Elliot Posner. In this course I got to closely examine how the EU works and learn about its influence on the world stage. I have constantly referred to things that I learned in this course in every modern Europe-centered class that I have taken thus far, including the ones I took in Maastricht.