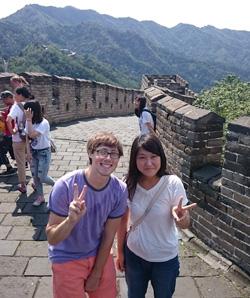 Where did you study abroad? How did you choose your location?
I studied in Beijing, China. I chose this location because I wanted to complete my Chinese minor with as much immersion as possible—I wanted to get fluent. Also, Peking University is the most prestigious university in China, and it came with a nifty scholarship, too.

How has studying abroad changed your global?
How hasn't it? I met people from all nationalities—Chinese of course, but also German, Italian, Filipino, and Thai students. Our conversation naturally turned to cultural differences, political attitudes and other things. I've spent the entire semester convincing my Australian roommate which political candidate to support in the 2016 U.S. election, and I discussed why the United States sometimes seems to be the World Police while playing video games with my Austrian friend. From within the bubble of the U.S., it's hard to even realize which values are thrust onto you by your environment, and which values are your own. I definitely believe that my worldview has widened with these conversations, and that I'm a more thoughtful person from them.

How did classes you took abroad differ from courses offered on campus CWRU?
I took an all-Chinese curriculum here in Beijing, which differs from the mostly computer science curriculum back home. Even as soon as I got here, I noticed it was very different. Our class built on some fundamental ideas that I hadn't even known about previously, and because I was taking 20 hours, naturally the workload was higher. I felt myself progressing really quickly as well.

What advice do you have for students who are considering study?
Do it! It actually truly does "widen your perspective" as people claim. CWRU’s relationships with other institutions make it seamless enough that there really is no reason not to study abroad.

What places are next on your bucket list?
Excellent question: Germany, Italy and Belarus, to visit friends and experience Europe. Then perhaps India, and then maybe somewhere in South America or Africa.

Koby was the recipient of one of two full-ride Chinese Government Scholarships CWRU awarded to study abroad students in the 2015-2016 academic year.