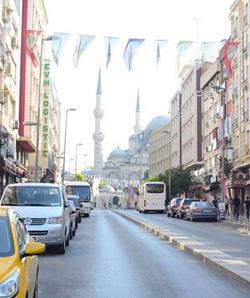 Where did you study abroad? How did you choose your programs?
Turkey was the first I looked up because I was born there. My dad was in the Air Force, and he was stationed a few hours south of Ankara at Incerlik AB. It was pretty interesting to realize that I was pronouncing the name of my birthplace wrong for the first 21 years of my life. The second reason was that I felt that a lot of Europe would be pretty westernized as far as culture is concerned, and I thought I could learn and expand more by being in an environment that was more different from the U.S. than most of Europe (and was I wrong, there are so many things to learn everywhere). Finally, there were classes being offered to undergraduates there that I couldn't get at CWRU so I got some diversity in my academic experience.

How has studying abroad changed your global perspective?
I spent the majority of my time hanging out with other study abroad students, most of whom were from Europe. I learned a lot about how the EU works, especially on topics of interest to college students, like getting jobs and traveling. I've a much better idea of how diverse the culture and politics are, and also how some components of each country in Europe are more regional and shared by neighboring countries. As for Turkey itself, there are a few things that are a bit more innate that I got in the habit of doing. I really took to the more relaxed approach to meeting times and not necessarily following the clock all day. It took me a while after coming home to adjust back to being on time. That is the kind of thing that you hear about when discussing differences between cultures, but it is interesting how I just assumed that as part of my habits. I feel like that proves how difficult it really is to be part of a culture different from that in which you were raised. There are so many innate things that I couldn't see or feel and that I did not emulate. I could probably spend a decade in Turkey and never seem Turkish. I feel like there was so much complexity that when someone references or makes an assumption about a whole country or culture they are really just missing the whole picture.

What was one thing you did abroad that you couldn’t have done in Cleveland?
I could walk through the streets at night and meet people. The number of older gentlemen dressed up in suits socializing over tea and a cigarette at midnight on a weekday is incredible. There is a more vibrant social life that is much more open, in person and on the streets, in Ankara than there is in Cleveland (or anywhere in U.S.). I don't think I will ever stumble upon a circle people of jamming with a clarinet, some drums, singing, dancing and talking in a random section of Cleveland.

What advice do you have for students who are considering study abroad?
Plan and get things done early so you can relax when you arrive. Nothing is more stressful than waiting for your visa when your plane leaves in less than two weeks. Also, there will be plenty of things to learn and handle when you arrive, and it makes things even more hectic if you are one of the five people who has to do something extra because you bring something your program required you to bring. Also don't be afraid to contact the program staff, or other students currently abroad at that university. I reached out and it saved a lot of time when trying to understand things that are different at universities in other countries. Just like at CWRU not all of their website will be up-to-date all the time, and some things are not documented. The best conversation you can have is with a student at CWRU who has been at that university, or who is visiting CWRU from that university.

What places are next on your bucket list?
The Taj-Mahal (environmental damage is closing in, and it might get closed to the public in a few years), along with as much of India as I can see. After that I'm planning to do a trip so I can visit some friends who were also studying abroad in Turkey. But I probably can't do it all at once so I'm looking at spending some time in Thailand, or Malaysia, as well as Korea, and then getting back to the Middle East and Europe further in the future.