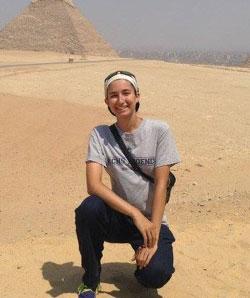 Where did you study abroad? How did you choose your programs?
I studied at the American University in Cairo, Egypt. Kind of like CWRU, the American University is a large university with a lot of flexibility regarding which classes you can take, especially for international students. They also have a semester-long exchange program, a pretty well-developed music department, a renowned Arabic language program, and a great mix of faculty (many local and many expats). The first two were things that I was specifically looking for, and which ruled a lot of other schools and countries out, but the last two were awesome discoveries after the fact.

How has studying abroad changed your global perspective?
The first thing I noticed while studying abroad was how far-reaching Western products and cultural quirks are--that they were not only present but prevalent in Egypt--but also how little they really affected Egyptian attitudes and traditions. I definitely got a new perspective on how privileged I am as an American--Egyptian and Lebanese friends I made at the university knew who our presidential candidates were, for example, while I wasn't sure who their president was before I arrived. They understood English, German, and French well enough to write academic essays in those languages--I speak only the most basic Arabic and French. These privileges were nice when I was in America, but abroad they're just one bigger obstacle to work around. Before studying in Egypt, I thought I had a pretty good "global perspective," but it's nothing to the kind of perspective the students I met abroad have, where discussing politics is commonplace enough to use it as small talk with strangers as you pass by.

What was one thing you did abroad that you couldn't have done in Cleveland?
I got the chance to visit one of the oldest mosques in Cairo, the Mosque of Ibn Tulun, built in the 10th century. The intricacy and detail of the stone carving on the mihrab and arches was astounding. Walking around the courtyard gave me the same feeling as I get in a grand church, even though the architecture is so much simpler. Cairo is a massive international city, a hot, smoky, crowded, noisy place--but even the largest mosques, like Ibn Tulun and Al-Azhar, are quiet and truly peaceful.

What advice do you have for students who are considering study abroad?
Plan as much as you like, but expect your plans to be derailed. I did a lot of research but there's nothing like being in a foreign country in person--I ultimately ended up throwing out a lot of my planning in order to take advantage of opportunities that I couldn't have anticipated before they came along.

What was one thing you did abroad that you couldn’t have done in Cleveland?
The ocean was only a 15-minute tram ride away, so almost every week I was able to surf, swim and eat fish and chips at the beach, sometimes even between classes!

What places are next on your bucket list?
Most immediately I'd like to visit somewhere in Turkey--it seems like one of the most important meeting points of modern Eastern and Western society, has an amazing history, and is a critical location in the ongoing refugee crisis. I'd also love to visit Morocco, Algeria, and Berlin.