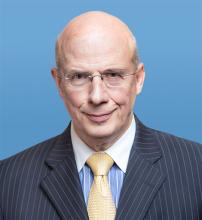 Under his leadership, AFPC has hosted Washington events for hundreds of foreign officials ranging from the Prime Minister of Malta to the Prime Minister of Russia; conducted hundreds of briefings for Members of Congress and their staffs; and organized dozens of fact-finding delegations abroad for former and aspiring cabinet and sub-cabinet officials.AFPC Fellows and staff regularly testify before Congress and frequently are found on the pages of major publications.

Herman Pirchner serves on the Editorial Board of Demokratizatsiya.  He is the autho rof numerous articles and a prescient 2005 book, Reviving Greater Russia(University Press of America). His most recent book, Post Putin: Succession, Stability, and Russia’s Future, was published by Rowman & Littlefield in 2019.

Herman and his wife, Liz, live in Washington D.C.