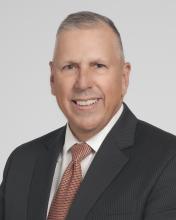 Rob Stall is the Executive Director of Cleveland ClinicInternational Operations. Cleveland Clinic InternationalOperations organization facilitates global relationships, leveraging the Enterprise’s intellectual capital to transform care and enhance quality and patient experience while driving sustainable, transformative growth and improving quality of life. This is accomplished via patient referral streams and the development of new business opportunities between the Cleveland Clinic and other international healthcare systems and organizations.

Rob previously served as Chief of Operations of the eight Cleveland Clinic Regional Hospitals. He has served as president for Euclid Hospital, President of Medina Hospital for two years and Interim President of South Point Hospital. He has been with Cleveland Clinic for over 35 years. Rob spent 13 years as the Division Administrator for the Regional Medical Practice, responsible for developing 14 family health centers throughout northeast Ohio and our first international facility in Toronto, Canada. He has been an Administrator for Neurosurgery, OB/GYN and the Finance Manager for the Division of Surgery.

In his military career, Major General(R) Robert P. Stall was most recently the Commanding General, 108th TrainingCommand (Initial Entry Training), responsible for initial military training for both Active Component and ReserveSoldiers for the United States Army. He was in the United States Army and Army Reserve for 36 years. During his military career MG(R) Stall served in Europe and had tours in Kosovo, Kuwait after 9/11 and Iraq during the war and the aftermath.

Rob has a Master’s degree in Business in QuantitativeBusiness Analysis from Cleveland State University and a master's in Strategic Studies from the U.S. Army War College. He received his undergraduate degree from John Carroll University in University Heights, Ohio.