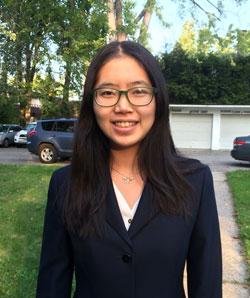 What made you want to study at a US university and CWRU in particular?
The best thing I like about US universities is that students have the opportunity to explore their interests before they decide their major. The flexibility of the education system was really attractive to me because I had no idea of what I was going to study after high school. Another reason that drove me here is my passion to learn about different cultures and see how they mix together, yet remain distinct in certain aspects. To achieve that goal, I chose CWRU since it is a rather small university, and students can get to know each other personally.

What do you miss most about your home country?
Food and family. Food comes before family because I video chat a lot with my parents.

How has your global perspective changed now that you have studied in the US?
Studying abroad was at first very exciting yet a little bit terrifying. I was afraid that I would not make any friends or get involved. At first, it took some time to deal with the cultural shocks and improve my English, but as I joined more clubs and started to volunteer in the local community, I met many amazing people who later became my friends, and language was no longer a barrier. It is really about being yourself and having an open mind when you meet people from different cultures.

Name one thing about studying in the states that you were surprised was actually true:
I did not expect that there would be so many exams/quizzes. Surprisingly, in China, most college students only need to worry about one mid-term and one final. One thing not related to studying: I was surprised by how much American people love cheese. They can put cheese on almost everything!

Name one thing you tried for the first time while studying at CWRU, and did you like it?
Wearing only a t-shirt and shorts on a Cleveland winter day. That was definitely very different!

What advice would you give to students arriving to study at CWRU?
Study hard, but have fun!