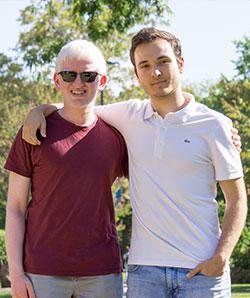 Diego: What made you want to study in the U.S. and at CWRU in particular?
The US is one of the global leaders when it comes to high-level academics and research. It is also one of the leaders in the professional sector in which I would like to work: aerospace engineering. The work ethos that the US transmits is unique and extremely useful for becoming a rounder professional. CWRU offered me the opportunity to experience all of these things in an extremely friendly and safe environment. Also, campus life at CWRU looked like a lot of fun and very diverse. There are so many things happening and so many opportunities to choose from that life at CWRU becomes very enriching and no one ever gets tired of it. I am very pleased with my choice to come here.

Vishal: What made you want to study in Spain and at Universidad Carlos III de Madrid (UC3M)?
I have always loved to travel and when study abroad became an option, it was too good of an opportunity to miss out on! The idea of living in another country for an entire semester seemed like the perfect way to explore sights, but, more importantly the culture. Also, I am pursuing a major in Computer Science and minors in Spanish and Economics. UC3M offered a variety of courses in computer science and economics, which allowed me to complete a number of requirements along with the constant exposure to the Spanish language.

Diego: What do you miss most about your home country?
I miss how everything used to be so much closer! The United States is well known for making everything big, and, most of the time that is a great thing. For example, when going to a restaurant I can guarantee you’ll be surely satisfied with the food portions. However, since buildings are so large and so spread out, walking from one place to another can take a long time. Be ready to take the bus a lot!

Vishal: What did you miss most about the US while you were studying abroad? What do you miss most about your study abroad country?
While I was abroad, what I missed most was seeing so many familiar faces. It took some time to get used to knowing only a few people in an entire country. Now, I miss the atmosphere of Madrid and especially the suburb of Leganés, which was a university town but also had many families that added to the homely and cultural feeling. I also miss the easy accessibility that Madrid and Europe in general provided with their excellent public transportation system- definitely something the US needs to catch up on.

Diego: Name one thing about studying in the US that you had heard about before arriving and were surprised it was actually true?
Students here are very flexible when it comes to how, where, when, and who they study with. Back home, studying was a very lonely and silent activity which had its own set of hours dedicated to it. I believe this made studying a bit tedious as it was not fully integrated into one’s life. Assignments at CWRU many times require you to work in teams where you must interact with others. The places and the times at which the team has to work together will not always be the same and one has to adapt to it. I believe this is a good thing as it also teaches students to better manage their time and take advantage of every moment that one may have between lessons; it makes people more efficient. Also, working as a group is very enriching and, in most cases, it even becomes more productive. Furthermore, the way in which one may solve a problem may vary from situation to situation. I believe gaining such flexibility is a great asset for growing as a professional in today’s world.

Vishal: Name one thing about studying in Spain that you had heard about before studying abroad and were surprised it was actually true?
I had heard about the siestas (afternoon nap) but never really thought about how that would play into the course of a day until I reached Madrid. Living in a suburb, the locals are not affected by the constant rush of tourists and city-life; therefore, each afternoon, the town would be silent between the hours of 2-5pm. All shops and most restaurants would be closed and everyone would be at home with their families. I found this fascinating, especially when by 6pm, the streets would be packed with children, families, music, and vendors until late in the evening.

Diego: What is something that you think would shock someone from the US about the culture in your home country?
Definitely how calmly we take life sometimes. People in the US are always rushing everywhere and they eat at different times depending on their schedule. In Spain things are much quieter: do not expect to get anything done from 1 to 3 pm because everyone has stopped working to have lunch with their friends and family; lunch time is a sacred time to rest and socialize. Also, I find that here in the US whenever a class finishes, everyone takes their stuff and leaves the class in a matter of seconds. I always stay behind tidying up my bag and taking it easy on my way out. No wonder why I always have a rough time finding a good seat for my next class!

Vishal: What is something that you found shocking when you first arrived in your study abroad country?
I found the language barrier a bit shocking when I first arrived. Although I spoke Spanish before then, picking up on the local dialect and accent was very difficult. After arriving at my flat building where I was supposed to meet the landlord on the first day, I waited with my friend for 15 minutes before an elderly lady came to ask who we were looking for. This was my first Spanish conversation that I had and it was a challenge to keep up, adding to the fact that I was concerned about finding the flat.

Diego: What are some similarities and differences between life in your home country and the US?
As both Spain and the US belong to ‘western’ culture, a lot of values and proceedings are similar. I have not had much of a rough time understanding how American society works, nor socialising with anyone. Nonetheless, apart from the things I mentioned above, American life is more work oriented; people want to succeed or perform well in their area. Back in Spain, people are a bit more likely to put their personal enjoyment first. This can be seen in how we, in Europe, have more days off of work than in America. I would like to say that this is not a good thing or a bad thing as everything has its pros and cons; it’s just another way of doing things.

Vishal: What are some similarities and differences between life in the US and your study abroad country?
Some similarities are the wide assortment of food options. Madrid is very famous for their Spanish food, with delicious tapas, paella, and much more. However, I was very used to eating different foods in the US. In Spain, I was excited to know that there were also plenty of options to eat tacos, falafels, and paneer along with the delicious Spanish cuisine. The biggest difference was is the daily schedule. In Madrid, punctuality is not as enforced as in the US. Businesses open later, close during the afternoon for siestas, and then stay open later in the evening. After that, people may go out to clubs and parties beginning at midnight and often do not return until after sunrise the next morning. In comparison, we start our day much earlier in the US, generally finish our workday by early evening and eat dinner, and end the day much earlier. Getting used to Madrid’s relaxed lifestyle was a comfortable change that has unfortunately been replaced with the hectic college lifestyle in the US.

Diego: What are some similarities and differences between studying in your home country and at CWRU?
I really like how CWRU breaks down a course in different continuous assessments evenly spread throughout the semester. It makes it much easier to get by while making learning more effective. If you work regularly every day, you’re almost guaranteed to obtain excellent results. Back home we would have most of our final grade decided with a final exam. It was difficult to know what exactly the teachers required from us or what concepts were important. When the final exam approached, one had to try to memorize everything all of a sudden and take the test. Grades were not as good. Okay, maybe I was a bit too critical there, but one thing in common both universities have is how willing people are to help each other. Both places encourage a very special sense of community that contributes to making students feel comfortable when asking for help when difficulties arises. This makes ties between classmates very strong and thus student life more enjoyable.

Vishal: What are some similarities and differences between studying at CWRU and abroad?
At both universities, professors are very willing to answer questions and help outside of class. Adjusting to a new lifestyle and curriculum is made easier with help from professors and other students. Much of the content in classes is comparable, which allows more students to take advantage of study abroad while still completing major requirements. A key difference is how grades are determined at each university. At CWRU, assignments, projects, quizzes, tests, and the final exam all play an important role in determining the final grade. This helps to maintain constant reinforcement of the material but also increases the workload throughout the semester. At UC3M, the final grade depended most heavily on the final exam with some classes weighing their final as 60% of the total grade. By decreasing the workload throughout the semester, there was much more leisure time while abroad, however, the month before finals became much more stressful than at CWRU.

Diego: How has your global perspective changed since arriving in Cleveland?
My global perspective has definitely broadened. I am exposed to other ideas and ways of doing things which I believe is highly enriching. I can now take what I am observing around me and use it to better approach problems in any other situation, almost anywhere in the world. Increasing your global perspective is one of the most important things that you can learn from studying abroad though one may not see its beneficial effects right away. I am now more open-minded, tolerant, comprehensive, productive, and confident. I highly recommend studying abroad!

Vishal: How has your global perspective changed since you studied abroad?
After growing abroad, I have many more cultural viewpoints to compare. When I arrived in Madrid, President Trump had just been inaugurated and it was interesting how many people would grin when I mentioned where I was from because of the recent political change. Everyone in the world stays updated with what happens in our country and it is very important to be aware of how certain changes can affect a whole population. I also had many new experiences which has allowed me to appreciate cultural differences and learn how to adapt to changes rather than find faults in them.