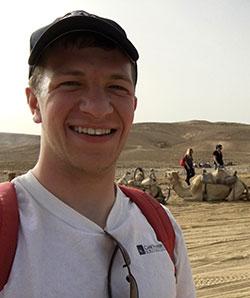 Where did you study abroad? How did you choose your programs?
I studied abroad at the Hebrew University of Jerusalem, Israel. Israel was the obvious choice because I wanted to perfect my Hebrew language skills, gain exposure to Israeli entrepreneurship, and experience a country close to my heart. I settled on Hebrew University in particular after they promised to let me live with native students and offered an attractive scholarship.

How has studying abroad changed your global perspective?
I'm more conscious that the world is a bigger place than just the U.S., that other people elsewhere go about their lives differently, and that educating yourself about the world is equally as important as enlightening yourself academically. People elsewhere emphasize a variety of values different than ours, including travel, leisure time, and hospitality, and being around that has shown me I really do have the power to decide what's most important to me.

What was one thing you did abroad that you couldn't have done in Cleveland?
I lived my life almost entirely in a foreign language and achieved fluency, something I could never have done at home. And I don't just mean classes, but also TV, books, conversations with strangers, and life with my suite mates and best friends. I reached the point where I repeatedly dreamed in Hebrew, and I was once even stopped by security because the agent thought I was hiding my Israeli passport.

How did classes you took differ from courses offered on campus at CWRU?
Unlike courses at CWRU, all of my classes except for one were in Hebrew. Two were graduate level courses on the language, one was on capital markets, another on international relations, and the last on philosophical logic. In that logic class I learned plenty of things I still don't know how to say in English. I was also able to take a part-time internship for credit and work at a venture capital startup called Our Crowd.

What advice do you have for students who are considering study abroad?
Know what you want to get out of the experience before you even start it. That could mean achieving a certain level of language proficiency, making lots of friends from different countries, or even just having an adventure. The trip goes by a lot more quickly that you think, so I'm a strong advocate of going in with a plan and being flexible about it.