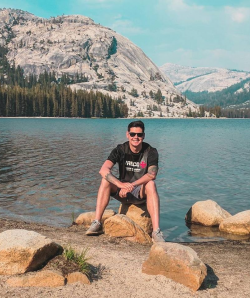 Márcio O’Dwyer, an international student from Brazil whose cat is a viral sensation on YouTube, says studying at CWRU was a dream come true. He has wrapped up a PhD in Physics and moved on to a job in San Francisco, but he left behind some words of encouragement for the next generation of CWRU students. Read on for Márcio’s tips for making the most of life in Cleveland.

What is it like to have a video go viral on YouTube? What opportunities have you had since your cat answered the phone?
It’s very interesting. I’ve had to hire an agency to manage the video and licensing for TV. The level of exposure you get is also crazy. The video has been shown in all major network channels in Brazil, the US, and at one point I even gave an interview for a TV show in NHK (Japanese TV channel). At the very least it’s just a pretty good ice-breaker. Watch Márcio's video here.

What made you want to study at a US university and CWRU in particular?
The US is a great environment to do research in my area (Cosmology and Astrophysics). A lot of the best scientists are here, and you have the opportunity to constantly interact and collaborate with people at the top of your field. CWRU, in particular, is home to a respected research group in my area (the Particle-Astro-Theory group in the Physics department). I was also interested in working with my now advisor, Professor Glenn Starkman.

In the end, my expectations were exceeded because not only I managed to work with amazing people in my field, but also participate in projects outside of my thesis work. For example, I am doing machine learning for a technical art history project involving people in the Departments of Physics and Art History, the Cleveland Museum of Art, and the Cleveland Institute of Art.

What do you miss most about your home country?
The people (family and friends), some aspects of the laid-back culture and the food.

How has your global perspective changed now that you have studied in the US?
Studying in the US, especially in a big institution such as CWRU, will expose you to people from all over the world. Being around such a diverse group of people shows you how much we are similar, no matter where we’re from, while it also gives you sensibility and awareness to deal with cultural differences.

Name one thing about studying in the US that you had heard about before arriving and was surprised it was actually true.
I think I had fairly good expectations of what studying here would be like. I guess the level of immersion was something I had heard about before but didn’t fully grasp what it meant. I could also say that the ability to meet and interact with the best people in the field was even easier than I expected. The excellence of the work done here as well. I actually expected coursework to be more difficult than it turned out to be, but part of it is because the lectures and homework were better than I expected them to be.

Name one thing you tried for the first time while studying at CWRU.  Did you like it?
All sorts of Americans clichés such as going to NFL, NBA, and MLB games. Going tailgating. Holiday parties such as Halloween and 4th of July. Having American barbeques. Oh, and American diners are the best! I also had the chance to go on a few amazing road trips across the country and visit some of the national parks. Sorry, that’s definitely more than one thing.

What advice would you give to other international students arriving to study at CWRU?
Embrace the culture and be open minded. It’s too easy to be critical of cultural differences and isolate yourself with people from your own country. Don’t. It takes effort to build an appreciation for things outside your cultural bubble, but there’s a reason why people from other countries enjoy what they enjoy, so be outgoing and make an effort to see things the same way they do.

What is your favorite place to visit in the Cleveland area?
I’m a fan of the bar and dining scene. There are plenty of breweries and nice places for a late night hang out.

What would you like to do after finishing your studies at CWRU?
I just recently signed a contract to work with Yelp as an Applied Data Scientist in their engineering team. So this Fall me and my wife will be moving to San Francisco which is pretty exciting.