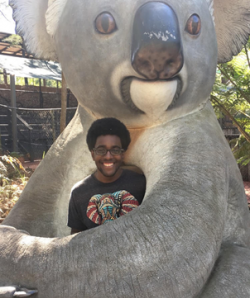 Miles Booker spent Spring semester 2018 studying Chemical Engineering at the University of Sydney. His semester abroad was his first time traveling out of North America. Find out how Miles chose Australia, and how it changed his global perspective.

What made you want to study abroad in Australia and at University of Sydney?

I have always wanted to explore a different country (I had never left North America before), and I knew studying abroad would be the best time to do so. I picked Australia because the country's native language is English, as I was worried trying to learn another language would impact my studying. I picked The University of Sydney (UofSyd) because it is one of the top 5 universities in Australia, and one of the top 50 in the world. Also, Koalas.

While I was abroad, I missed some services that I had grown accustomed to (namely Amazon Prime). Also, Sydney was an expensive city, so the average cost on almost all goods were higher. Now that I am back however, I miss the warm weather in Sydney, and the overall beauty of the city, and country. I also miss certain small things such as shopping at local grocery stores (Woolworth's)and I miss hearing the Australian accent.

Name one thing about studying in Australia/Sydney that you had heard about before studying abroad and were surprised it was actually true?

Kangaroos are found all over in the wild and can act like deer. At first I didn't believe it, but while traveling up to Byron Bay in the middle of the night a Kangaroo was sitting right on the side of the road and almost jumped out in front of the vehicle!

What is something that you found shocking when you first arrived in Australia/Sydney?

Honestly, it was all the cars driving on the left-hand side of the street. It took a bit to learn how to properly cross the street.

What are some similarities and differences between life in the U.S. and Australia/Sydney?

Although Australia has fewer citizens than the U.S., the way the country runs and feels is pretty similar to the U.S.. Living in Sydney felt like I could be living in any big city in the U.S. Hearing English as the main language also felt like I could be still in the U.S. People tend to carry themselves the same in Australia, if not slightly more laid back than your average American. The differences arise when you leave the big city and go more towards the towns off the coast. The general respect for the wildlife and the environment is much higher in Australia, as they are home to a large portion of the Great Barrier Reef. The nature of Australia is breathtaking, from the abundance of natural waterfalls to the many unique species of wildlife.

Studying abroad in Australia was at first difficult, due to the average test and average homework assignment being harder than at CWRU, but what was expected of each student was lower. The University is also in a city, but more its own separate entity, like CWRU is to Cleveland. Chemical Engineering is mostly the same, with a larger emphasis on protecting the environment.