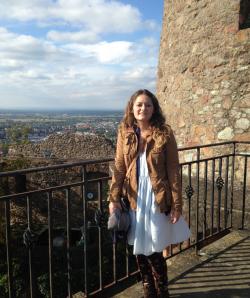 What made you want to study abroad in Germany and at Heidelberg in particular?
I was interested in studying abroad in Germany mainly because I was eager to improve my language skills and to get to know the country better over a longer period of time. I had been studying the German language since high school, had taken two shorter exchange trips to Germany before, and it was a goal of mine to go back as a study abroad student. I chose Heidelberg in particular because I wanted to live and study in a smaller town rather than a large metropolitan city so as to be able to come into contact more with local people and be comfortable exploring on my own. Looking back, I am glad I chose Heidelberg because I was able to meet a lot of German students and explore the nooks and crannies of the city itself. One of my favorite things was searching for cafés in different sections of the city. At the end of my year in Heidelberg, I think I must have visited at least fifteen different ones!

What did you miss most about the US while you were studying abroad? What do you miss most about your study abroad country?
While I was in Germany, I really missed the close relationships I had with my fellow students and with professors at CWRU. The academic environment tended to be more impersonal in Germany and I missed being able to go to peers or professors for help and advice throughout the semester. Now that I am back, I miss some of the everyday things about my life in Germany. For example, I miss the market outside my apartment on Saturdays, eating lunch on the grass by the river between classes, and practicing speaking German with my roommate over dinner in the evenings.

Name one thing about studying in Germany that you had heard about before studying abroad and were surprised it was actually true?
Before studying in Germany, I had learned in my German classes that Germany was a very environmentally friendly country. Once I got to Germany, I was surprised to find out this was even more true than I had anticipated. In every apartment and student dorm there were three different kinds of recycling and even composting! It took a little while to get used to how to sort all of the trash, but now it is something I miss about Germany as well.

What is something that you found shocking when you first arrived in your study abroad country?
One thing that shocked me when I first arrived in Germany was how many people in Heidelberg spoke English. At the university, in restaurants, and even on the streets, almost everyone I met could speak English. While some people studying abroad might have the problem of not being understood by the locals, I actually had the problem of having to ask people to speak German with me so I could practice and improve my language skills.

What are some similarities and differences between life in the US and your study abroad country?
There are a lot of general similarities between life in the US and in Germany. Students in both countries tend to do the same sorts of things, such as eating lunch in the cafeteria, studying in the library, going to class, and going out in the evenings. In terms of differences, one big difference that I noticed was the public transportation. In Heidelberg, it was possible to get around easily with the bus or the street car. Furthermore, to get to the airport or to travel to another city, I could just take the train. These options for public transportation gave me more mobility than I have in the US because I didn’t have to rely on having a car or a friend to drive me where I needed to go. This was an aspect I really appreciated about living in Germany.

What are some similarities and differences between studying at CWRU and abroad?
I found student life to be in some ways very different at CWRU and in Heidelberg. For example, Heidelberg has a more decentralized campus and most students live in their own apartments or commute from home. There are also fewer student organizations and clubs than there are at CWRU. Furthermore, at CWRU most students have moved away from their families for the first time and are all in the same phase of life, whereas the age of the students in Heidelberg varied greatly, some were young like me, but there were also students were in their mid to late 20s.

How has your global perspective changed since you studied abroad?
I think studying abroad changed my global perspective in small ways by showing me how other cultures do things differently and by bringing to my attention the difficulties of adjusting and adapting to a new culture. As a study abroad student, I was oftentimes confronted with the decision to either change the way I did some things to fit in with the German culture or to keep doing things “the American way” because that was what I was used to. I think adjusting to a new culture will always require compromise, but I now find it interesting to consider what makes this adjustment easier or more difficult for people adapting to life in any unfamiliar country.