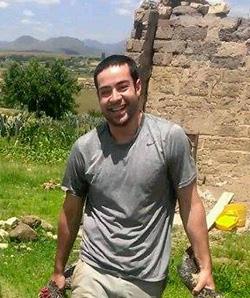 Where did you study abroad? How did you choose your programs?
I studied abroad over winter break near Maseru, Lesotho in the small village of Ha Motloang. The reason I traveled to this small village instead of the city is because I was studying rural electrification and doing field-testing/data collection for a grant with the EPA [Environmental Protection Agency]. It is a little different than a normal study abroad experience because I was not taking a class—I was collecting data on what modifications would best suit my device and if there was a market for it. I choose Lesotho because of the high percentage of people with cellular phones and who live off the grid. The device I designed is a pedal used for charging cell phones with human power. (about 80 percent have cell phones and only 30 phones have access to gridded electricity). It is a very mountainous country (it is actually called The Mountain Kingdom of Lesotho) so it is hard to run power lines through the entire country every though it is only about twice the size of Connecticut, my home state.

How has studying abroad changed your global perspective?
Americans have a very tainted view of Africa. By studying abroad in Lesotho, I was not only able to experience everyday life in a typical African city, but also how a great percentage of the world lives: without running water or electricity. It solidified the realization of how fortunate we, as citizens of a developed country are to have amenities and utilities available to us at every hour of the day, close by. A lot of the stereotypes that are perpetuated about Africa are not true, and to be able to go there and determine the validity myself was satisfying. For example, one of the villagers cooked meals for us while we camped out in tents for a few nights, and we were served dessert coffee on fine China: it was the first time I had ever used a saucer in my entire life and it was in the middle of southern Africa, in a home without electricity or running water. Even though they lead a simple life, they still have many very nice things.

What was something funny that happened to you while studying abroad?
The morning after a group of us had finished wiring a solar panel system with two LED bulbs and a cell phone charger in an elderly woman’s house, she approached our tent and, through a translator, told us how she had stayed up all night looking at the light. She was so excited she said she actually felt a little sick to her stomach (don’t worry she ended up feeling fine!).

What was one thing you did abroad that you couldn’t have done in Cleveland?
Everything about the cuisine was different. I ate ox liver, and a sardine with trout stew, and a vegetable dessert smoothie called “mitoro” made from a common local weed. I was able to chase down a chicken in the village and follow the Lesothoian traditions as it was prepared. It was oddly spiritual and peaceful, the way they prepared the meat, and it was an experience I will remember.

Besides your study abroad, tell us about a course you’ve taken at CWRU that has influenced your global perspective.
The first SAGES [Seminar Approach to General Education and Scholarship] class I took at CWRU was one title “Engineering for the World’s Poorest”. It was actually the reason I was able to apply for the EPA’s P3 grant and receive funding to travel to Africa to do research with my classmate and partner on the project, Ian Ferre.

What advice do you have for students who are considering study abroad?
Do it. If you can fit it into your schedule in ANY way, do it. It doesn’t need to be with a bunch of friends, you’ll make new friends. It doesn’t matter what you’re studying, there are always classes you can take. It doesn’t need to be to any specific place, just go out and explore the world.

What places are next on your bucket list?
I would like to travel in Myanmar to explore more options relating to portable and affordable renewable energy options, as well as South America to develop the same idea. My next “just-for-fun trip” will hopefully be to New Zealand to backpack through the Southern Alps and maybe make a quick stop in Australia.