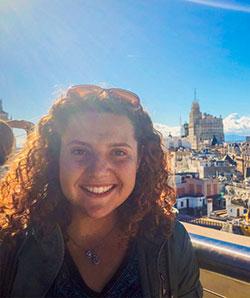 Where did you study abroad? How did you choose your programs?
I studied abroad at Universidad Carlos III de Madrid (UC3M) in Spain. I found this program on the study abroad website when I was looking at suggested options for Biomedical Engineering majors. I knew I wanted to study in Europe, and I was immediately attracted to Spain because I took (and loved) Spanish in high school. However, even though I had studied Spanish for almost 4 years, I knew I needed a university that offered my BME classes in English- and UC3M had that. I also thought Spain would provide a great chance to experience a culture different from my own in addition to boosting my language skills. Finally, because Madrid is a major European city, it provided the chance to travel easily to other European cities which was something I really wanted to do as well!

How has studying abroad changed your global perspective?
Study abroad has changed me in countless ways, my global perspective being one of the biggest. I learned, the hard way, that not everything we are taught in school in the USA is the same for people in other parts the world. Realizing this, I had to take a step back and evaluate where my opinions or knowledge really came from. It also forced me to look at my own views from an outside perspective and think deeper about them. Some of my favorite things about my time abroad were the heated discussions over cultural differences that I had with my Spanish friends. From debating the number of continents there are in the globe (this number ranges from 5 to 7 if you group the Americas and Europe/Asia) to discussing political outlooks, I was constantly questioning what I went my whole life believing was set in stone. Upon returning from my time abroad, I have brought this critical and thoughtful outlook back with me. I believe I have a deeper understanding of differences and a much broader global perspective thanks to study abroad.

What was something funny that happened to you while studying abroad?
I have countless hilarious stories about language barriers and miscommunication. These include confusing the Spanish word for country, país, with the word for feet, pies, and the word for rain, llover, with the one for cry, llorar. However, I would say one of the funniest stories I have from my study abroad happened when I was getting a new screen protector put on my phone at the mall. I was with two of my Spanish friends and was so proud of myself that I asked the store clerk for help and explained what I needed without either of my friends having to translate for me. The guy helping me was about our age, and he was doing a great job putting on my screen protector (anyone who has tried to do that knows how hard it is). I wanted to tell him that he was great or that he was doing a great job, so I said estás bueno, which literally means “you are good”. However, in Spain, estás bueno actually means “you’re hot”. As soon as the words left my mouth, my 2 Spanish friends started hysterically laughing and the guy helping me smiled and chuckled a bit, but continued his work on my phone. I had no idea what I had said, so I was just standing there awkwardly until he was done and gave me back my phone with a smile. After my friends and I left, one of them finally told me in English what I had actually said, and though I was so embarrassed at the time, looking back now, this story makes me laugh so hard.

What was one thing you did abroad that you couldn’t have done in Cleveland?
I would say the biggest thing I experienced in Spain that I could not have in Cleveland was living with a Spanish roommate and in a residence hall of almost entirely Spanish students. Though Cleveland is a diverse city with a melting pot of people and cultures, nothing can compare to the full immersion I got while abroad. My Spanish friends were my translators, dictionaries, tour guides, and teachers, but they were also the people with whom I ate every meal, toured and traveled, worked out, and became closer than I could have ever imaged. In living with someone, you learn more about them than you ever could have otherwise, and my experience in the residencia allowed me to develop a deeper knowledge (and love) for Spanish culture. I still stay in touch with my Spanish friends, Skyping even with a 6 hour time difference and almost 4000 miles between us. They are some of my closest friends and it’s incredible to think about how we defied cultural differences, found our similarities, and forged unbreakable bonds.

What advice do you have for students who are considering study abroad?
If study abroad is something you think you want to do, MAKE IT HAPPEN! Studying abroad was the single best decision of my life and I would recommend it to anyone! That said, make plans, hopes and even expectations, but be prepared for almost nothing to happen just as you imagined it, and that's okay. Throughout your time abroad you will constantly be surprised by things you could never have even imagined— take advantage of those. Sometimes its the things that we least expect that become the ones we remember most. Have aspirations, make travel plans, and most of all, go in with goals in mind, but leave plenty of room for the in-the-moment changes because those are the things that will define your experience.

What places are next on your bucket list?
There are way too many to even list now. Being abroad made me realize how much of the world I haven’t seen and want to! I definitely want to see more of Europe, specifically eastern Europe (Russia, Poland, Germany, etc.). I’ve officially fallen in love with the Spanish language, so that has sparked a desire to go to South/Central America too (and hopefully use/strengthen those language skills)! I’ve also always wanted to go to India, China and South Africa so those are high on my list as well!