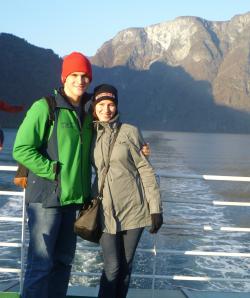 This spring we are celebrating the aphrodisiac called travel through the Global Perspective of Stephanie and Doug, two CWRU alumni who met on study abroad and are getting married this June. Stephanie and Doug signed up to study abroad in Costa Rica to learn about comparative healthcare systems, enhance their Spanish language abilities, and to explore the beautiful country. They ended up learning a lot about each other, and three weeks after the program ended, started dating. In 2014, Doug proposed, and Stephanie said yes. This is their story.

We’re getting married this June and then we’ll live in Boston for a few years while Doug finishes his postdoc. Steph is hoping to do health policy research or analysis for a NGO, governmental organization or consulting group. After, we plan to move to DC and of course travel often.

What inspired you to go on the study abroad program?

The Costa Rica trip was the first time Steph had traveled internationally. She had wanted to go to Costa Rica since learning about it and seeing photos of it in high school Spanish and when she saw the opportunity at Case, she signed up as fast as possible! Since going, she’s caught the travel bug and hopes to continue traveling.

Doug studied abroad in Botswana because it seemed like a great way to experience a country he wouldn’t have otherwise had the opportunity to visit. He went to Costa Rica to fulfill his Global and Cultural Diversity requirement and to learn about comparative healthcare systems while transitioning from a math to biology research focus.

Describe how you met while abroad?

We met once or twice before the trip to Costa Rica on the Case Crew team, but the trip was when we really got to know each other. Doug actually had procrastinated on finding a ride to the airport on New Year’s Day and ended up asking Steph for a ride. The only way that was happening was if he came to her family’s New Year’s Eve party. So Doug got to meet Steph’s entire family right before flying to Costa Rica. On the trip, the instructor always had the vegetarians sit together to make dining easier, so we were always at the same table and were able to get to know each other very well. We started dating three weeks after coming home.

When did you know the other was going to be important to you?

Steph: I knew Doug was different when I saw him interact with my family on New Years Eve. He was so sweet and they were complete strangers to him. It’s hard to say if there was an exact moment when I knew he would be important in my life. It’s cliche but I think I’ve heard someone say falling in love happens slowly at first and then all at once, and I think that’s true. THe knowing came over time.

People often say that travel is an aphrodisiac. What impact do you think meeting abroad had on your initial feelings for each other?

It was nice to get away from campus and the crew team (sorry guys!) and to have time to get to know each other outside of the day-to-day pressures of training and competition (and academics). We were much more relaxed around each other. Being abroad, we were also both a little outside our comfort zones and that helped make us more open to meeting and getting to know new people.

What impact do you think meeting abroad has had on your overall relationship?

Doug: I think navigating traveling to a new country and experiencing an unfamiliar environment forces you to discuss and plan and work together to find solutions to day-to-day challenges. You get really good at communicating.

Steph: I think it also helped us get to know each other in a different way. We weren’t around our friends and got to see how the other acted outside of our comfort zones, which I think can say a lot about a person. It also seemed to signal that we both prioritized travel and wanted to see new parts of the world, which is something I think both of us wanted in a partner.

Have you traveled together internationally since? Where to?

Since the Costa Rica trip, we traveled to Ireland in August 2013 and Doug came to Copenhagen to visit Steph during her semester abroad in Fall 2014. While there, we also took a trip to Norway. We both love traveling and are planning our honeymoon for Rome and Croatia after our wedding in June.

How do you think studying abroad has impacted you (personally, professionally, or otherwise)?

Doug: I think studying abroad myself and visiting Steph on her study abroad trip helped me develop confidence in traveling to new places. I now frequently travel in my postdoc and get to give talks at international meetings. My familiarity with traveling abroad in school has helped me figure out how to explore new places and get the most out of where I am and enjoy my time with my colleagues. I think it has also given Steph and I a lifelong shared passion for seeking out new adventures.

Steph: Studying abroad has given me an appreciation for other cultures and other people, which I think can demonstrate the delicacy of policy making; those impacted by certain policies may not react in the way you’d expect or your hometown would. I think going abroad and trying to immerse yourself in a new culture can give you a great appreciation for both your own culture and others. It also helps break stereotypes and learn to see people as individuals instead of groups. Additionally, studying abroad has helped me see both how big and how small the world is and how impactful traveling is.