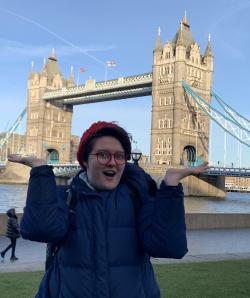 Talia Eshenbaugh is a theater and cognitive science major who studied abroad at the London Academy of Music & Dramatic Art during spring semester 2020. Unfortunately, her time in England was cut short as a result of the global COVID-19 pandemic. She shares what she learned from this unique experience, how her study abroad will help her reach her career goals and why she highly recommends other students study abroad.

How did you decide to study at the London Academy of Music and Dramatic Art (LAMDA)?

LAMDA had an existing relationship with Case, and typically every year the junior acting majors are sent off to study abroad in London, as it had been for many years before I ever came to Case. I knew I wanted a deeper acting education and I knew London was an amazing place to get it.

What was your favorite thing about your time at LAMDA?

Everything I learned not just about acting, but about life. Living with my best friend in an apartment in London? Taking public transit, meeting new people (and in some cases celebrities!), experiencing a different kind of life: it was all incredible.

What obstacles did you think you would encounter when you were planning to study abroad?
If you did encounter them, how did you overcome those obstacles?

I was worried about money a lot, I was also just afraid to be so far from home, like in case of an emergency.
For the money part, my parents and I set up an international credit card, which I was able to use so that I was never caught off guard in terms of money. Emergency-wise, I was pleasantly surprised: I never quite had an “emergency” but I did get sick while there, so I went to the doctor, and they saw me and gave me medicine without charge! It was easy and convenient.

How was your experience at LAMDA impacted by the pandemic?

It was cut short. I was having the time of my life there and when we had to leave mid-March when we were supposed to stay until the end of April, I was heartbroken.

How did you adapt to this major change in your student experience and what have you learned from it?

After we got home, it was a couple weeks of nothing until LAMDA arranged for us to have some private Zoom lessons with our acting instructors. It was something, which I am grateful for. I learned that life is unpredictable. Sometimes crazy things happen, and you have to keep living and moving forward.

What are your career plans, and how do you think living and studying in another country will help you in your career?

My career plans are to ultimately be a professional actor, and I suspect my study abroad experience will help me with that a lot. Directors and producers will see LAMDA on my resume and go: “Ooh!” Not to mention, I fell so deeply in love with London that I want to return ASAP, and possibly live and work there, which having already lived there will CERTAINLY help me with.

The world is simultaneously bigger and smaller than you think. I had so much in common with the friends I made in England, but also there were lots of little differences that left us shocked.

What advice would you give to other CWRU students considering studying abroad?

DO IT. Don’t let your dreams just be dreams! It will enrich your life!