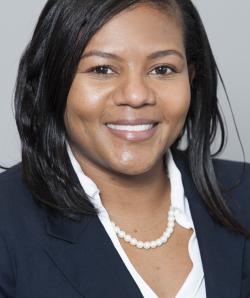 Professor Arcola Whatley, a Cleveland native, joins Case Western Reserve University's School of Law to supervise the Second Chance Reentry Clinic at the Milton A. Kramer Law Clinic. Professor Whatley has had a diverse legal background: practicing two years at the City of Cleveland Law Department as "in-house counsel" for the Department of Public Works before transitioning to the Director of Public Work's Office as a Special Projects Coordinator. She most recently comes from the Legal Aid Society of Cleveland where her work focused on employment, tax, housing, record sealing, and reentry issues for those who could not afford representation in civil matters. Professor Whatley attended Bowling Green State University and received her Bachelor of Arts in Political Science and Psychology. She was the Academy of Matrimonial Lawyers Fellow (2007) and spent a year working with the Family Law Unit at the Legal Aid Society of Cleveland before receiving her JD from WMU-Thomas M. Cooley Law School.