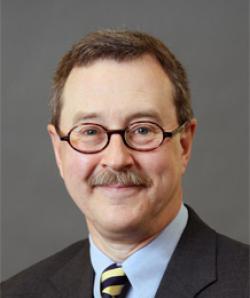 Mr. Ledford practiced law for four years in Virginia before turning to the study of history. He joined the Case Department of History in 1991 and was appointed to the law faculty in 1996; for the law school he has taught courses on European Union Law, European legal history, and the European legal professions. He has published numerous articles and a book, From General Estate to Special Interest: German Lawyers 1878- 1933 (Cambridge University Press, 1996). Last year he was the John W. Kluge Fellow at the American Academy in Berlin. His most recent article is "Formalizing the Rule of Law in Prussia: The Supreme Administrative Law Court, 1876-1914," 37 Central European History 203 (2004). His current research focuses on the Prussian judiciary from 1794 to 1914. He has been a Fulbright Senior Research Fellow and held fellow-ships from the German Academic Exchange Service and the German Marshall Fund of the United States. He is active in the American Society for Legal History and serves on the Editorial Board of the Law and History Review. He is now Editor of Central European History.