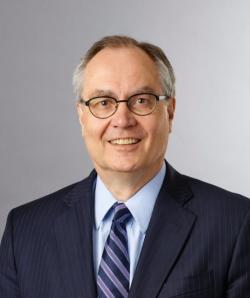 David Abbott is the inaugural Dean’s Distinguished Jurist in Residence, having just completed 19 years as the president of The George Gund Foundation. In that role, he was a member of the executive committee of The Fund for Our Economic Future, a regional collaboration of grant makers and others; and he was a board member of Team NEO, a partnership of business and philanthropy. Both work to catalyze economic transformation in Northeast Ohio.

Prior to joining the Gund Foundation, Abbott served as president of University Circle Incorporated, executive director of the Rock and Roll Hall of Fame and Museum, and executive director of the Cleveland Bicentennial Commission. Abbott was also the Cuyahoga County Administrator for nearly a decade and, early in his career, he was a reporter for The Plain Dealer.  He holds a B.A. in political science from Denison University, an M.S. in journalism from Columbia University, and a J.D. from Harvard Law School.