Video: The IIIM - between lessons learned and novel approaches to support accountability for core crimes committed in Syria

Catherine Marchi-Uhel, Head of the International, Impartial and Independent Mechanism to Assist in the Investigation and Prosecution of Persons responsible for the Most Serious Crimes under International Law committed in the Syrian Arab Republic since March 2011 (the IIIM) will describe how by undertaking a structural investigation, the IIIM is building its evidence collection and the first phase of its case building. She will also address some of the challenges faced by the IIIM and the opportunities offered by its unique mandate set by UN General Assembly resolution 71/248 of 21 December 2016.

This will be of interest to attorneys working in international law.

Catherine Marchi-Uhel, the head of the United Nations International, Impartial and Independent Mechanism for Syria (IIIM) will be speaking at the Law School on Aug. 29. The IIIM was established by UN General Assembly resolution in December 2016 to investigate Syrian atrocities and pave the way for accountability. On July 3, 2016, United Nations Secretary-General appointed Marchi-Uhel to head of IIIM. Marchi-Uhel is a former French judge with broad international experience trying and adjudicating war crimes. During her 27-year career, Marchi-Uhel has provided legal support to the International Criminal Tribunal for the Former Yugoslavia, the UN Mission in Liberia, and the UN Interim Administration Mission in Kosovo. She has also adjudicated for the Extraordinary Chambers in the Courts of Cambodia and served as Ombudsperson to the UN Security Council’s Sanctions Committee.

Ms. Marchi-Uhel was appointed by the Secretary-General as Head of the International, Impartial and Independent Mechanism to Assist in the Investigation and Prosecution of Persons Responsible for the Most Serious Crimes under International Law Committed in the Syrian Arab Republic on 3 July 2017. She took up her official duties on 8 August 2017.

Prior to taking up her function on 8 August 2017, Ms. Marchi-Uhel has served as the Ombudsperson for the Security Council Committee pursuant to resolutions 1267 (1999), 1989 (2011) and 2253 (2015) concerning ISIL (Da’esh), Al-Qaida, and associated individuals, groups, undertakings and entities. Before, that, she has served as Head of Chambers at the International Criminal Tribunal for the Former Yugoslavia (ICTY). Ms. Marchi-Uhel previously served as a full-time international judge at the Pre-Trial Chamber of the Extraordinary Chambers in the Courts of Cambodia (ECCC) and was a Senior Legal Officer with the ICTY Appeals Chamber. From July 2014 to April 2015, Ms. Marchi-Uhel was seconded to the United Nations Mission in Liberia (UNMIL) as Principal Rule of Law Officer, advising the Special Representative of the Secretary-General and the Deputy Special Representative of the Secretary-General for Rule of Law on justice and security matters.

Ms. Marchi-Uhel became a member of the French judiciary in 1989 and served as juge du siège at the Tribunal de Grande Instance de Coutances, being specially in charge of cases involving juveniles. She was later seconded to the French Ministry of Foreign Affairs, Legal Affairs Division, Human Rights Section before joining the United Nations. 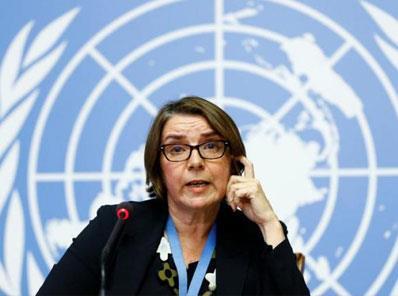 Catherine Marchi-Uhel
Head of the UN International, Impartial and Independent Mechanism for Syria