2019 Society of Benchers inductees include 12 alumni and a justice 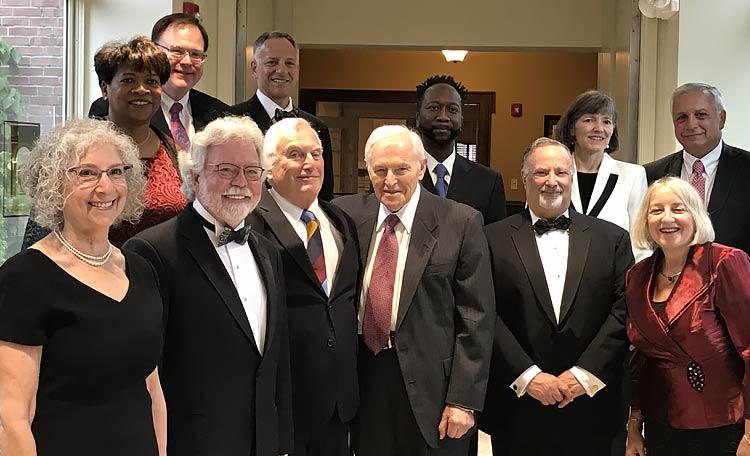 On June 20, 2019, Case Western Reserve University School of Law honored the achievements of 12 distinguished alumni and a prominent member of the Cleveland legal community who were inducted into the Society of Benchers – the law school’s alumni Hall of Fame. Established in 1962, each year the Society inducts new alumni members, as well as a faculty member and public member, on the basis of extraordinary achievement and dedication to the highest principles of the legal profession. Attended by nearly 300 society members and guests, the 2019 induction dinner was held at the Linsalata Alumni Center at Case Western Reserve University.

At this year’s event, we honored retired law professors Leon Gabinet and Lewis Katz, who emceed the benchers induction ceremony for many years. They appear in the photo with the inductees.

We are pleased to announce the 2019 inductees:

Tom Callahan (’85), Partner and Chair of Thompson Hine’s Tax Practice Group, and the incoming Chair of the ABA Section of Taxation, which has 16,000 members and regularly provides comments to the Department of the Treasury and the IRS regarding Treasury Regulations and other administrative guidance.

Mike Cherkasky (’75) is currently the Executive Chairman of Exiger. A pioneering figure in the world of financial crime, fraud, corruption and money laundering enforcement and compliance, Mike has held senior leadership roles with some of the most esteemed law enforcement agencies and multinational corporations in the world.

David R. Cohen (’91) has been appointed as Special Master by 18 different federal judges in over 30 different complex cases, including six multidistrict litigations. He is currently serving as Discovery Master in In re National Prescription Opiate Litigation, which has been described as the most complex litigation ever prosecuted in federal court.

Natalie Finn (’72) began her career as a prosecutor in Fairbanks, Alaska, and then spent four decades as a judge in Anchorage. Since recently retiring, she has been a pro tem judge, presiding over cases in communities large and small around Alaska.

Bill J. Gagliano (’80) is a partner with Ulmer & Berne LLP, where he has served as Chairman of the firm’s Real Estate Practice Group and a member of its Management Committee. He has also served as Vice-Chair of the Board of Directors of the American Red Cross.

Charles E. Hallberg (’77) is the founder of several health care companies including MemberHealth, LLC, one of the nation’s largest pharmacy benefits management companies, which was acquired by CVS. A nationally known philanthropist focusing on children’s issues, Hallberg has served as executive vice president and general counsel at General Computer Corporation, and corporate counsel for Revco D.S., Inc.

Margery B. Koosed (’74) is the Aileen McMurray Trusler Professor Emeritus at the University of Akron School of Law. She teaches Criminal Law, Constitutional Criminal Procedure, and seminars on mistaken convictions, and her writing focuses on death penalty litigation issues. She has served as a commissioner on the State Public Defender Commission and as Coordinator of the Ohio Death Penalty Task Force.

Jack McConnell (’83) is a judge on the U.S. District Court for the District of Rhode Island, and serves as a member of the Committee on Codes of Conduct of the Judicial Conference of the United States. Before becoming a federal judge, Jack was a trial attorney for 25 years, during which time he represented persons injured by exposure to asbestos, states that sued the tobacco industry, and children poisoned by lead paint.

Jay Shapiro (’80) has practiced law for almost forty years, half of which was spent in the public sector. A New York City prosecutor for two decades who focused on white collar crimes, Jay is now a partner at the New York office of White and Williams LLP where he represents clients in complex civil litigation and investigations, including corporate internal investigations and criminal and regulatory enforcement and also serves as co-chair of the firm’s Cyber Law and Data Protection Practice Group.

Kathryn S. Mercer (’83) is Professor of Lawyering Skills at Case Western Reserve University School of Law, where she teaches Legal Writing; Leadership, Experiential Learning, Advocacy and Professionalism; Alternative Dispute Resolution; Mediation; Special Issues in Family Law: Child Welfare. She is also coach of the school’s award-winning ABA, National, and VIS moot court and commercial arbitration teams. In addition to experience in legal practice, she has worked for the federal and state courts as mediator, arbitrator, and family conciliator. And in 2018, Katy was national curling champion.

In November of 2018, Melody J. Stewart made history as the first African-American woman elected as a Justice of the Ohio Supreme Court. Prior to joining the Supreme Court, Justice Stewart served as a judge on the Eighth District Court of Appeals for a dozen years. Although she is not a graduate of our law school, she earned her PhD across the street at Case Western Reserve’s Mandel School of Applied Social Sciences and began her career as Director of Student Services at Case Western Reserve University School of Law before attending law school and becoming a professor at Cleveland-Marshall College of Law.