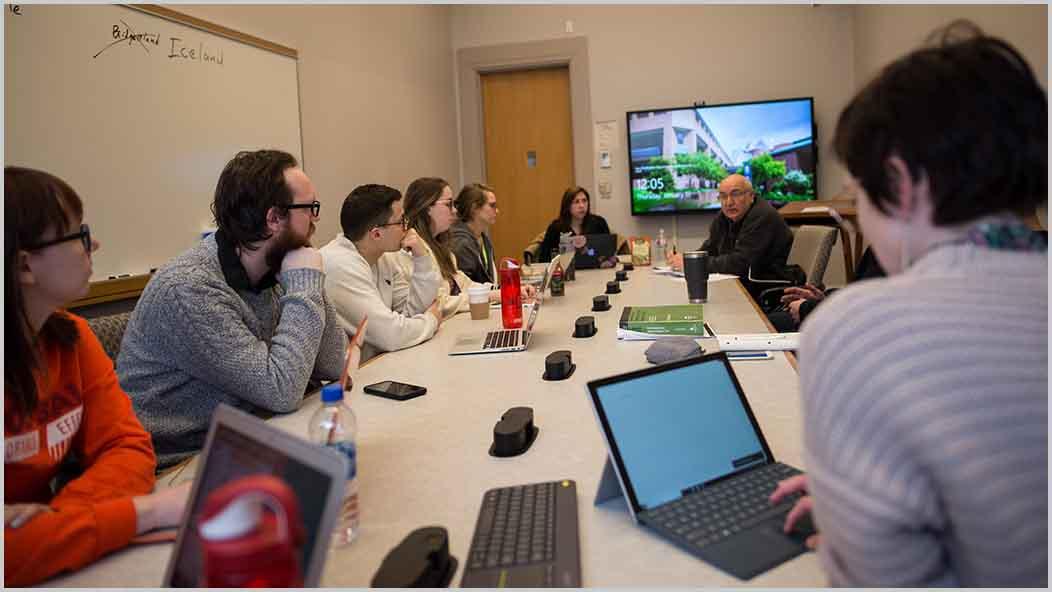 The project has received funding from alumnus Timothy Geisse (JD ‘84) and the John F. and Mary A. Geisse Foundation. Yemen has eclipsed Syria as the world’s worst humanitarian crisis, with an estimated 70,000 to 80,000 deaths attributed to the conflict between March 2015 and August 2018. An August 2018 United Nations report concluded that both sides of the conflict have committed numerous war crimes and crimes against humanity.

The project, which was modeled after former International Prosecutor David Crane’s successful Syrian Accountability Project at Syracuse University, invited students to work in teams in the first comprehensive effort to document atrocities and lay the foundation for successful prosecutions of the responsible parties.

Expecting a handful of volunteers, director of the War Crimes Research Office and former Chief of Prosecutions for the Special Court for Sierra Leone James C. Johnson was overwhelmed by the response. More than 70 students, including LLMs with fluency in Arabic, volunteered to assist in the effort.

“When we put the word out about this last semester, we didn’t expect this kind of response,” said Johnson. “Despite the workloads and pressures of law school, these students are volunteering their time because they see this as an opportunity to make a difference with respect to the growing humanitarian crisis in Yemen.”

Johnson found the perfect student to serve as executive director in 1L Laura Graham, who holds a Ph.D. in sociology and decided to enroll in law school specifically because of her interest in international conflicts. Before coming to Case Western Reserve, she was a professor at Tufts University, teaching courses on genocide, human rights, social justice and conflict resolution.

“After years of teaching in a classroom, I decided that I needed to be able to affect change on the ground,” said Graham. “I came to Case because the law is the best outlet that I can use and this school has one of the strongest international law programs in the country.”

Led by Johnson and Graham, the students working on the Yemen Accountability Project are creating four distinct products that will document war crimes in Yemen to assist in future prosecutions: a Conflict Narrative, a Crime-Based Matrix, Draft Indictments and Analytical Dossiers.

The Conflict Narrative is a chronological and historical documentation of relevant legal, geopolitical, and military events. The legally relevant incidents will be extracted and placed in the Crime-Based Matrix where the Geneva Conventions and its Protocols, the Rome Statute of the International Criminal Court, and the Yemeni Penal Code will be applied to each incident.

Using the Crime-Based Matrix, draft Indictments will be created by representationally charging those that are most responsible.

Finally, Analytical Dossiers, or white papers, will break down the large amounts of data collected in the former documents and provide analysis. This will include trends analysis of the war showing how the types of crimes develop and change across the region.

“We’ve come a long way in a short time, first building the team and now getting into what will be a multiyear project that will give students great experience while making a difference in the world,” said Graham.

The culmination of these products will provide prosecutors in a future tribunal a trial package to undertake an efficient investigation and prosecution of those most responsible for war crimes and crimes against humanity in the Yemeni Civil War.

“Our goal is to build on the success of the Syria Accountability Project, which has produced over 27,000 pages of relevant data, analysis and reports on the Syrian crisis for clients including the UN High Commissioner for Human Rights, The International Criminal Court, The Commission of Inquiry for Syria, the International, Independent, Impartial Mechanism for Syria, and various interested States parties and NGOs,” said Johnson. “This research will be invaluable in the international community going forward and I’m so proud of the way our students have responded to this challenge.”

The Yemen Crisis and CWRU’s Yemen Accountability Project were the subjects of the May 24, 2019 broadcast of “Talking Foreign Policy,” the quarterly radio program hosted by CWRU Dean Michael Scharf which is broadcast from Cleveland’s NPR station, WCPN 90.3 FM Ideastream. Johnson and Graham were guests on the broadcast, which can be streamed online.

This project is the latest to be launched by CWRU’s War Crimes Research Office, which was established in 2003 and named for the late Nuremberg prosecutor and CWRU Law Professor Henry King. The Office, whose work was nominated for a Nobel Peace Prize by an international prosecutor, has to date assisted in the prosecution of war criminals before the Yugoslavia Tribunal, the Rwanda Tribunal, the Special Court for Sierra Leone, the Cambodia Tribunal, the Lebanon Tribunal, the Iraqi High Court, the Uganda War Crimes Chamber and the piracy courts in Kenya, Mauritius and the Seychelles.