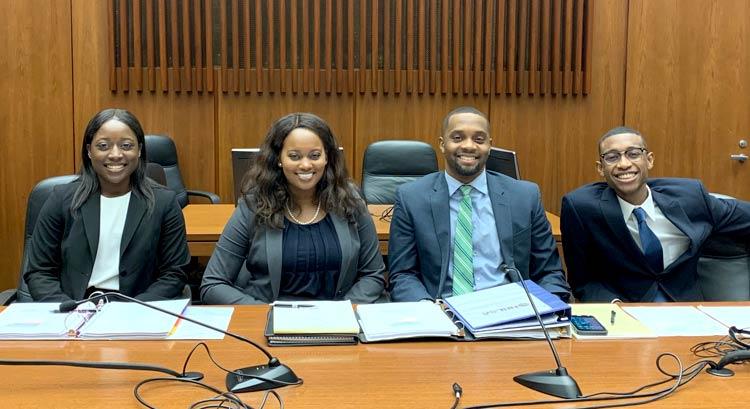 In an extraordinary sweep, all four of our team’s oralists won top speaker awards for the first time in our law school’s history. 2L Andrea Shaia was the 9th best speaker, 2L Megan Maccallum was the 5th best speaker, 3L Taylor Frank was the 3rd best speaker, and 3L Alex Lilly was the 2nd best speaker in the competition.

Established in 1960, the Jessup Competition is the world’s largest Moot Court tournament with over 680 law schools from 100 countries. In 2008, CWRU Law School won the Jessup World Championship, the most recent US team to win the global competition. The team is coached by Dean Scharf, and alums and former Jessup Champions Conor McLaughlin and Chris McLaughlin. 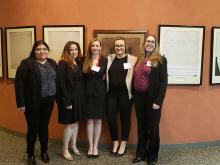 On March 16-17, the Case Western Reserve University School of Law International Criminal Court Moot Court team, consisting of Kelsey Smith 3L, Adrianna Velazquez-Martinez 2L, Caroline Ford 1L, Gloria Neilson 2L, and Jazmine Edwards 1L, competed against two dozen teams from across the continent at the North American Rounds of the ICC Competition at Pace Law School in New York. The competition involved the legal issues of whether unilateral use of force against chemical weapons facilities constitutes a crime of aggression and whether a law professor who provides the government one-sided legal advice can be held criminally responsible for aiding and abetting aggression. Based on its high briefs and oral argument scores in three preliminary rounds, the Case Western Reserve team advanced to the Semi-Finals, where it lost a close round to Temple Law School. The Case Western Reserve team was coached by Professors Michael Benza and Cassandra Robertson.

Earlier in the year, the BLSA Mock Trial team competed in the Constance Baker Motley Mock Trial Competition in Chicago February. Out of 15 registered teams, the team came in third and earned the right to represent the Midwest Region in March at the national competition.

In Chicago, Muff, a second-year CWRU law student, earned the award for best advocate among all competitors in the competition.

CWRU Law students John Gardner and Sarah Lucey advanced to the final round of the regional National Moot Court competition in Cleveland last November, earning a berth in the national rounds in New York City in January. The bench included the newly-elected Justice of the Ohio Supreme Court, Melody Stewart, former Director of Student Affairs at CWRU School of Law. Professors Katy Mercer and Tim Duff coached the team to victory. The second CWRU team was comprised of Jamie Lamson-Buscho, Andrew Condiles, and Rachel Andelman.

At the national competition, Lucey and Gardner were defeated in a close match in the first round, but prevailed with a win in the second round.

CWRU teams captured second and fourth place at the Case Classic, the first Mock Trial competition of 2018-19. The competition was composed of 20 teams from law schools from Ohio, Pennsylvania, Alabama, and Virginia.