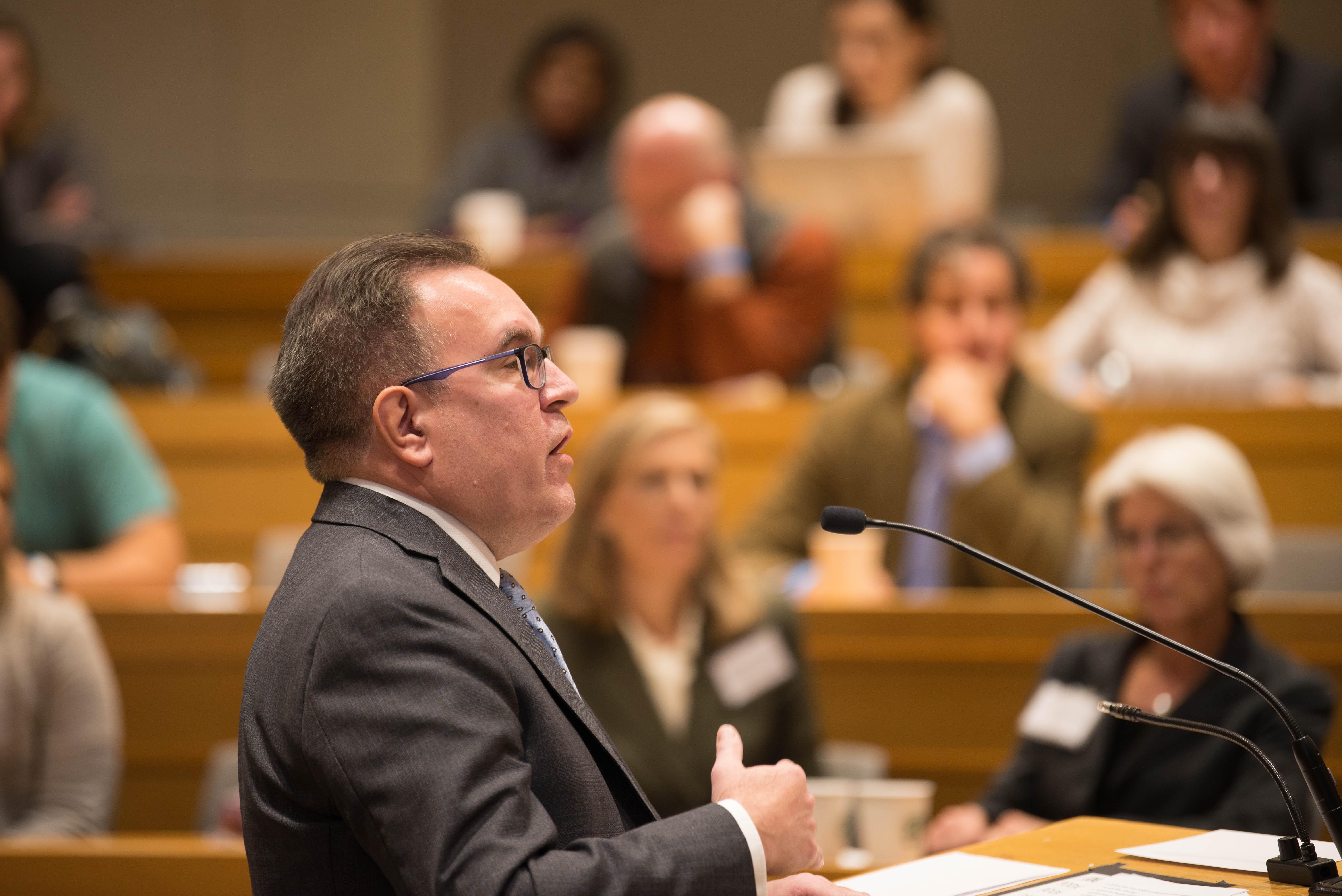 The Administrator of the United States Environmental Protection Agency spoke about the history, the current direction and his hopes for the future of the EPA in recent remarks at the Case Western Reserve University School of Law.

Andrew R. Wheeler, the U.S. EPA’s 15th administrator, delivered a keynote address to the “Environmental Protection Agency turns 50” symposium sponsored by the law school’s Coleman P. Burke Center for Environmental Law and the Case Western Reserve Law Review on October 18, 2019. Administrator Wheeler, a Case Western Reserve University alumnus (B.A., 1987), focused on the progress the United States has made through EPA-administered legislation like the Clean Air Act and Clean Water Act and the evolution of the agency’s role over the past half-century.

Administrator Wheeler described how his agency is becoming a more efficient and collaborative governmental agency and discussed the challenges posed by changes in the economy since. When created in 1970, the EPA consolidated offices from other departments that tended to stay “in their silos,” or specialties such as pesticides, air pollution and water pollution. According to Wheeler, this attitude combined with the recently-implemented EPA Lean Management System (ELMS) has made EPA a nimbler, more responsive organization despite having 4,000 less employees than in 1999. Wheeler cited the progress made on permit back-logs (a 54% reduction) since the ELMS was implemented. This system has been the subject of controversy, as noted in recent reporting by Bloomberg Law. Wheeler also touted the EPA’s successful record of Superfund National Priority List site cleanups. According to Wheeler, the EPA removed “all or part of twenty-seven sites… the largest number of deletions since 2001” in Fiscal Year 2019.

After his planned remarks, Administrator Wheeler took questions from the audience on a range of subjects, including the administration’s approach to climate change and media coverage of the EPA’s efforts. A version of the Administrator’s remarks will be published in the Case Western Reserve Law Review along with the papers from the Environmental Protection Agency Turns 50 symposium. Additionally, a small group of university students staged a peaceful demonstration, protesting current EPA policies, and Bloomberg Law covered Wheeler’s combative answers on criticism from the media and environmental groups.

This lecture was just one of a series of programs sponsored by the Burke Center intended to showcase different views and perspectives on environmental law. Video of the administrator’s remarks is available here. Additional programs are highlighted on the Center’s website.