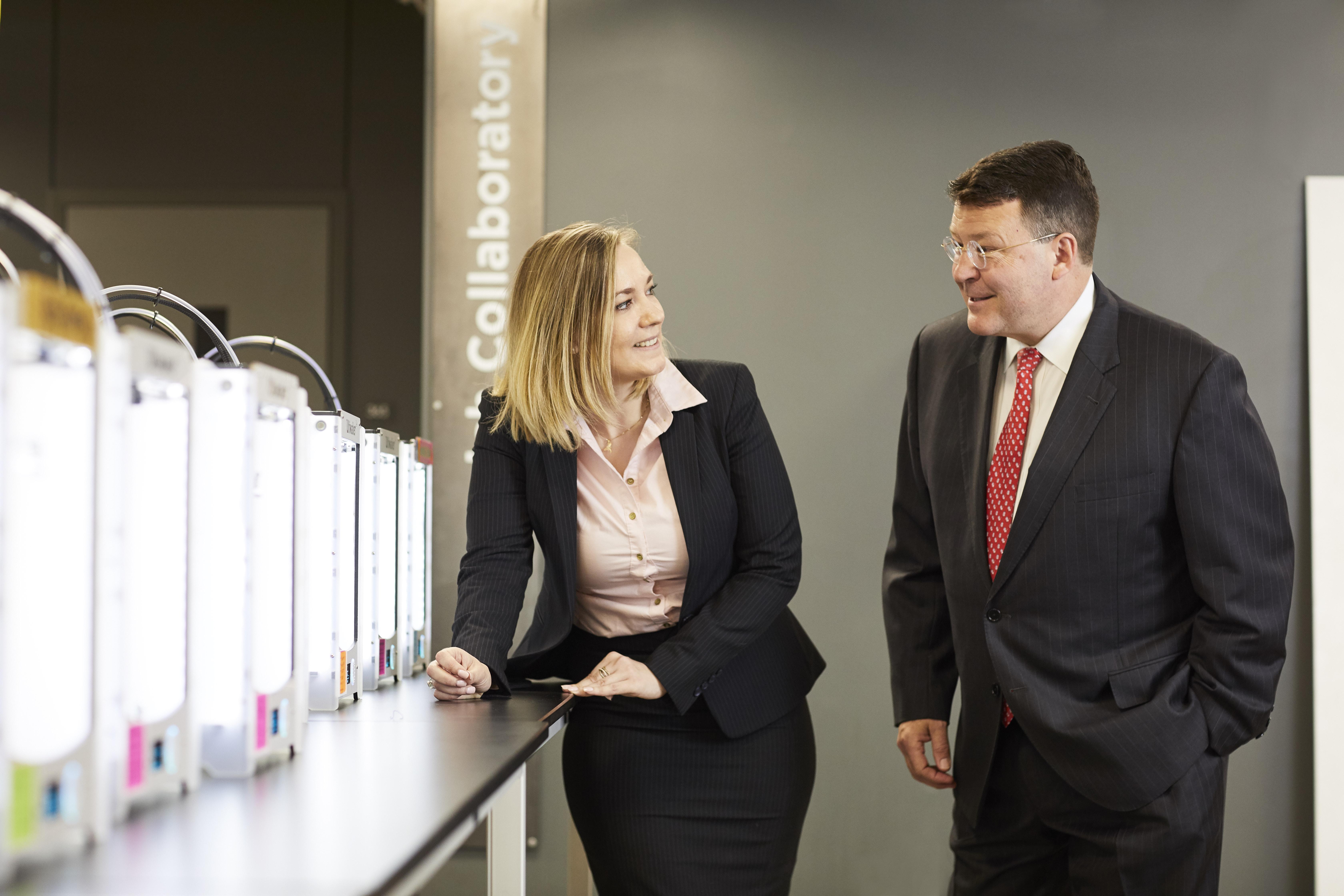 Since its launch in 2009, the Fusion program has served as a training ground for graduate students in law, science and management to develop the skills needed to meet the underlying challenges of successful technology entrepreneurship and innovation.

Mixing students into interdisciplinary teams, the program is structured to lead them through a collaborative analysis of new technological innovation, with each team simulating the advancement of a raw invention to the point of presenting a juried investment pitch, demonstrating the product’s financial potential, intellectual property strength and an early-stage technological development plan.

For the first time in the Fusion program's history, the students’ moved beyond simulating the development of a new product and, instead, leveraged the resources of a flagship institution at the university to bring their ideas to life.

Housed in the seven-floor Richey Mixon Building on CWRU’s campus, think[box] is built to be accessible to even the most modest ideas, but is also capable of serving as a start-to-finish launchpad for entrepreneurs looking to develop a product from a prototype to a commercial reality. The on-campus facility is also the largest of its kind in the country that is open to the community and free to use.

Each floor of think[box] represents a different stage of innovation, starting with community and collaboration – where ideas are developed – to the entrepreneurship and incubator levels – where innovators can take advantage of a range of services from the many think[box] partners, such as the School of Law’s IP Venture Clinic, CWRU LaunchNET and the Technology Transfer Office. It is a self-service model that allows entrepreneurs and prototype inventors to consult with free legal representation for a range of corporate legal and intellectual property issues. Help is also available for developing business plans and investment pitches, commercialization and fundraising strategies and access to free or low-cost space to house their startup company. Think[box] houses a cornucopia of state-of-the-art prototyping and fabrication equipment including 3-D printers, electronics development and wood and metal fabrication machines – all with the relevant tools needed by a creator, including the open-source documents and free classes needed to operate them.

“We’ve structured think[box] so a person can come and take their idea as far as they want. Any inventor can come in at the first level, develop an idea and build a prototype,” said Tiffany McNamara, Senior Director of Strategic Partnerships and Business Development at think[box]. “From there, if they wish, they can get consultation on market viability, intellectual property, investability and more.”

Serving thousands of students and entrepreneurs each year, think[box] was a natural partner for the Fusion program, which has worked with different technologies each year, including the internet of things (IoT), advanced medical imaging, clinical diagnostics, neuromodulation and water technologies, including a purification project that was developed in partnership with NASA.

“Every year, we’re looking to push students further into the innovation process,” said Ted Theofrastous, Managing Director and co-founder of the Fusion program. “In the past, we’ve worked with students to develop strategies for existing inventions based on a common scientific domain, usually coming out of CWRU laboratories. This year, we wanted to leverage the tremendous assets the university has in place to push students to actually design and prototype something new, using a common technology platform.”

Moving from the classrooms at the Weatherhead School of Business to the sixth floor of Think[box], Fusion students learned firsthand what goes into taking an idea from concept and actually building it into a product.

The class sessions at think[box] started with technical training for students to learn the capabilities and programming functions of an Arduino microcontroller, an open-source electronic IoT prototyping platform capable of bringing smart functionality to independent electronic devices. From there, students learned about the available resources in think[box] and software design from Nick Barendt, Executive Director of the School of Engineering’s Institute for Smart, Secure and Connected Systems (ISSACS).

“To think that we were able to effectively introduce law and management students to hands-on electronics design and coding in the context of teaching them the art of commercialization was really remarkable,” said Fusion co-founder, instructor and CWRU chief innovation officer, Joe Jankowski. “It enabled them to move beyond just analyzing potential solutions from a multidisciplinary lens, to being personally connected to the development of their technologies.”

For Rebecca Lindhorst, a 3L law student studying intellectual property with a background in biochemistry and molecular genetics, the process of prototyping a product and taking it through commercialization was eye-opening.

“I’ve been focused on patent law but never had experience in product creation,” said Lindhorst. “Seeing how pieces come together was an incredible learning experience that is going to help me better understand the perspective of the inventors and how I can interact with them and how to pull out the info from them that could give them some type of protectable IP.”

The students were separated into five interdisciplinary teams and challenged to create an IoT product using a basic, over the-counter Arduino microprocessor that brings smart functionality to stand-alone components. Each team was provided with a complete Arduino kit, containing dozens of useful elements, as well as a small budget to obtain other necessary elements to create a functional prototype.

“The class was such an amazing experience, working not just with the faculty, but also my team members,” said Lindhorst. “Each of us brought our own expertise to the table. We relied on each other and most importantly, learned from each other.”

Working with students in the MBA, engineering and Masters of Patent Practice programs, Lindhorst’s team invented the “Lavender Retriever,” a dual-chambered scent and pheromone diffuser for dogs that relieves anxiety by releasing a combination of lavender essential oil and dog-appeasing pheromones when the sensor detects barking.

“Once we came up with the idea, our first step was to make sure our product was a novel concept that was patentable,” said Lindhorst. “We followed that with extensive market research and found that pet calming products and diffusers were both good markets with healthy annual growth.”

In the United States alone, there are more than 60 million dog owners. The team’s research showed that 21 percent had tried pet calming products ranging from $14 to $21 and that the potential commercial market for the product was conservatively $176 million dollars.

“We felt like our product had a few advantages over similar competition – other devices only diffuse one product, and they weren’t sensor activated, so they were much more expensive to keep stocked with high-cost pheromones,” said Lindhorst. “Also, our product roadmap featured the integration of smartphone control, data collection and potential AI enhancements down the road would provide us a competitive edge in a growing market.”

The team completed its analysis of Lavender Retriever by assessing the path to market. They determined they would need to raise $350,000 to get through the first phase of commercialization, starting with filing provisional patent applications, completing prototyping, securing manufacturing contracts, developing a website and designing a marketing campaign.

Finally, utilizing the staff expertise and capabilities of think[box], the team created a working prototype which they demonstrated as part of their end-of-year presentation.

“For all of our student teams, using a facility like this was invaluable,” said Theofrastous. “By the end of the class, each team created a real, working prototype of their product. This process of design and construction makes the opportunity analysis of both the core technology, as well as its new, innovative elements, much more tangible and real. Going forward, these students will have a strong understanding of not just their own areas of training, but can better see their connection to the broader ecosystem of innovation and entrepreneurship. It’s a little overwhelming at first, but these are very smart students and they did not disappoint.”