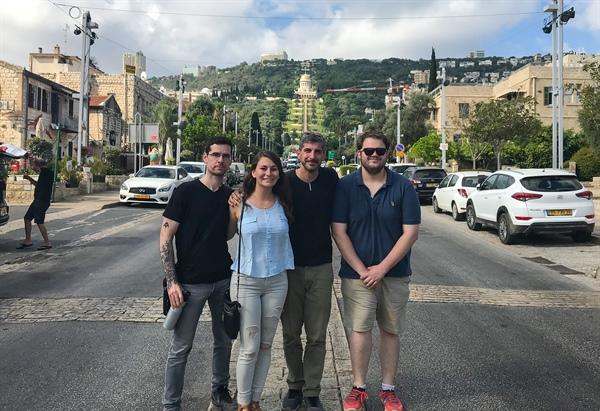 For nearly 20 years, Case Western Reserve University School of Law has played a leading role in the fight for human rights abroad.

Beginning with an endowment in 2001 by University Trustee Bruce J. Klatsky to establish an annual Human Rights Lecture and two fellowships at Human Rights Watch, the law school has continued to develop a robust presence in human rights.

In 2015, the school added its eighth clinic, the Civil Rights and Human Rights Clinic, which has traditionally focused on systemic abuses within the United States. With the help of grants from the CWRU Social Justice Institute and funding from the Frederick K. Cox Center, the clinic recently expanded its role in international human rights. In partnership with Al-Haq, an independent Palestinian non-governmental human rights organization based in Ramallah, Avidan Cover, Professor of Law and Director of the Institute for Global Security Law & Policy, and three rising second-year law students traveled to Israel and the Occupied Palestinian Territory this summer to document human rights violations for a report to be submitted to the United Nations and other advocacy organizations in international law.

“Since it was founded in 2015, the Civil Rights and Human Rights Clinic has focused on domestic cases, with a smaller part of our portfolio coming from international work,” said Cover. “The grants for this project have been invaluable, allowing our students to travel abroad and fully immerse themselves in the complex international issues in the region without the significant financial burden that comes with international travel.”

“Skype may have helped shrink the globe, but it doesn’t connect people the same way as the nature of in-person human interaction,” said Cover. “I wanted our students to see how people in the region live, the injustices they face and the impact that these issues have on their lives. When you work in human rights, having that tangible connection to the reality on the ground makes a significant difference.”

Joseph Shell, a rising 2L, spent the summer writing press releases and drafting short legal analyses for Al-Haq during a period of heightened tension along the border.

“The work became so personal very soon after I arrived here,” said Shell. “I had studied the Occupied Palestinian Territories extensively as an undergrad, but nothing prepared me for witnessing the human impact of the occupation first-hand.”

They will continue their legal work back at the school in the fall in a 12-hour-per-week externship with the goal of producing a joint report with Al-Haq on their findings by December.