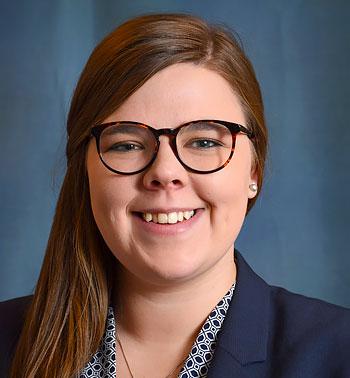 The Burton Awards, in partnership with the Library of Congress, presented by lead sponsor Law360, and co-sponsored by the American Bar Association, bestowed the prestigious honor to only 15 articles from entries submitted by the nation’s top law schools.

Slyder’s “Rape in the Civil and Administrative Contexts: Proposed Solutions to Problems in Tort Cases Brought by Rape Survivors,” was selected by judges and law school professors—including those from Harvard Law School, Stanford Law School and University of California, Berkeley Law School.

In May, she will attend a special reception at the Library of Congress in Washington, D.C, to accept her award.

“It’s an honor to have been selected for this award,” she said. “It’s an affirmation of all the work I’ve put into my education at Case Western Reserve, and a testament to the dedication of our faculty.”

A Cincinnati native, Slyder earned a degree in history and sociology from Ohio State University. After her first year of law school, Leah was a Judicial Extern with the Honorable Donald C. Nugent in the U.S. District Court for the Northern District of Ohio.

“Leah richly deserves this recognition,” said Professor Emeritus Jonathan Entin, who serves as faculty advisor to the Law Review. “She wrote superbly about a timely and challenging topic. She comprehensively analyzed the legal landscape and proposed a creative solution to a seemingly intractable problem.”

After graduation, Slyder will be joining the Cleveland law office of Jones Day.

“This is the third time that a student from Case Western Reserve University School of Law has won this prestigious honor,” said Dean Michael Scharf. “The first was Michele Connell, who went on to become the first female managing partner of Squire Patton Boggs’ Cleveland Office, and the second was Kathleen Harvey who won the award in 2016.”

“We are delighted that our students continue to get this type of national recognition for their impressive writing, which reflects the strength of our school’s writing program and our outstanding Law Review,” added Dean Jessica Berg.