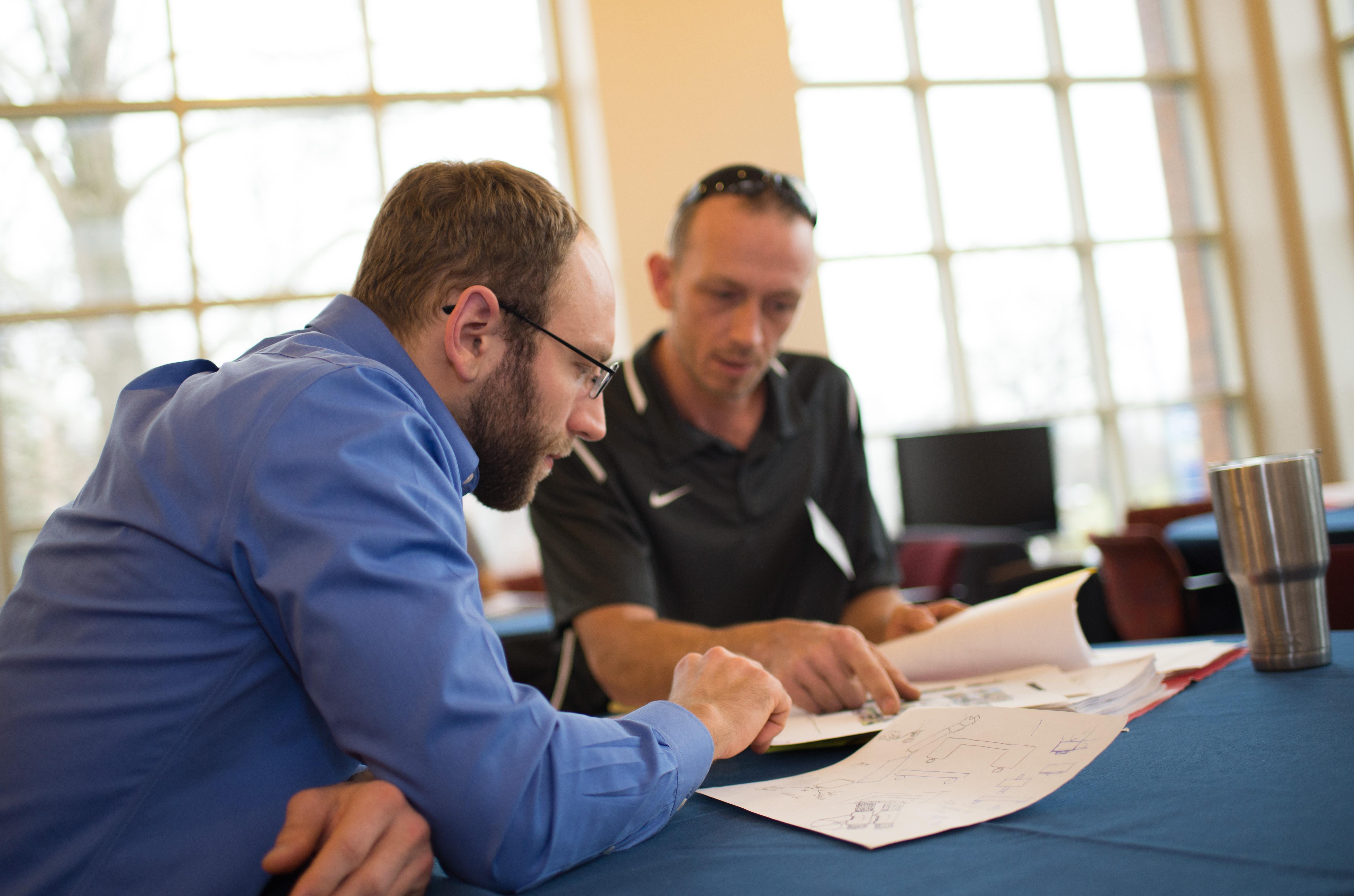 When the Leahy-Smith America Invents Act went into effect in 2013, it represented the most significant overhaul of the U.S. patent system in more than 60 years.
In addition to changing the “first-to-invent” system to a “first-to-file,” the law and subsequent executive actions directed the United States Patent and Trademark Office (USPTO) to work in partnership with intellectual property law associations across the country to create pro bono programs designed to assist financially under-resourced independent inventors and small businesses in all 50 states.

For Craig Nard, director of the Spangenberg Center for Law, Technology and the Arts, and Ted Theofrastous, managing attorney of the IP Venture Clinic and distinguished practitioner-in-residence, it was an opportunity that the law school couldn’t pass up.

“The goal of our center is to become a regional leader in intellectual property law, not just as it relates to the education of our students, but also in the development of our local economy as well,” said Nard. “Case Western and the Cleveland community have deep ties going back more than a century, so being able to give back to a region that has supported us for so long is important.”

As the Cleveland Intellectual Property Law Association’s (CIPLA) committee began work on a plan to roll out the new statewide program, Nard and Theofrastous volunteered the services and resources of the law school to assist with the launch.

“At the time, we were already in the process of putting together the IP Venture Clinic and building a robust back-end administrative system to handle client intake and screening,” said Theofrastous. “CIPLA’s biggest need was something we were already putting in place, so it made sense for us to take the ball and run with it.”

As a result, the Spangenberg Center added a new flagship institution to an expanding portfolio that now includes the Fusion Program, IP Venture Clinic and the Great Lakes Sports and Entertainment Law Academy.

Building the Plane While Flying It

With the near-simultaneous launches of the Patent Pro Bono Program and the IP Venture Clinic in 2014, Theofrastous and Nard’s challenge was to spin up two resource-intensive programs where nothing previously existed.

They needed money and manpower from the legal community.

“At the end of the day, lawyers go into this profession to make money, just like any other job,” said Theofrastous. “But this program doesn’t generate any revenue, so we had to find the right pitch with an appeal to the legal community to participate. Where we are now would not be possible without the generous commitment of our volunteers and donors.”

With funding from the Burton D. Morgan Foundation, Tarolli, Sundheim, Covell & Tummino LLP and CIPLA, the law school constructed office space for the IP Venture Clinic, hired staff and designed a cloud-based infrastructure to handle the client management services of both programs.

As applications from inventors around Ohio began streaming in, the next challenge was building the volunteer base.

“Its match.com for entrepreneurship,” said Theofrastous. “The demand for these services was always there, but now we were charged with providing the supply. When we launched, we had three volunteers and a goal of 50. Three years later, we have 44 volunteers and a goal of 100 as we look to expand out further across the state. This program, and anything it accomplishes, is a credit to the dozens of lawyers who have stepped up to help simply because they believe giving back is the right thing to do.”

The Patent Pro Bono Program streamlines the attorney-client match through screening and tracking systems that identify client readiness, maintain case continuity and ensure volunteers are connected only with serious inventors.

“The people who apply to this program are garage inventors and makers – grassroots people – but they lack the financial resources to retain patent counsel,” said Theofrastous. “The program’s most important job when we first bring them in is to put key barriers like patentability or venture financing aside while we just see whether there is a good idea there.”

After three years of recruitment, the Patent Pro Bono Program for Ohio is showing promising results built on the commitment from a group Theofrastous nicknamed, “The Founding Firms,” -  Benesch Friedlander Coplan & Aronoff LLP, McDonald Hopkins, Renner Otto, Tarolli Sundheim Covell & Tummino LLP and Squire Patton Boggs. The firms were the first to commit pools of billable hours to the program and lay the foundation for the 48 attorney-client matches it has created so far.

In April 2018, the Patent Pro Bono Program for Ohio, CIPLA and the USPTO held an award ceremony to honor the top firms and individuals who donated time to work with clients. Mark Guinto, an associate with McDonald Hopkins, was selected for the All-Star Volunteer Award for his donation of more than 50 hours to work with clients. The award ceremony came just a few weeks after the program held its second annual Patent Pro Bono Breakfast, where 30 attorneys and qualified inventors met on a Saturday morning at the law school to review inventions and potential protection strategies.

“The success of these programs is highly predicated on the people that run them,” said Grant Corboy, staff attorney for the USPTO’s Office of Enrollment Discipline. “Of the 22 regional programs, the Patent Pro Bono Program for Ohio has the highest per capita rate of attorney-client matches, which is a credit to the tremendous work that Ted and Case Western have done.”

Though the program is still in its early stages, Theofrastous believes that the win-win nature will continue to appeal to attorneys and inventors alike, leading to strong growth in the coming years.

“Good ideas can come from the average person’s garage,” said Theofrastous. “If we help these inventors out while providing the patent bar a way to give back to their communities that’s in their wheelhouse, we can organically grow a segment of our local economy while giving younger attorneys precious client-facing responsibilities that they don’t always get right away. Everyone benefits.”