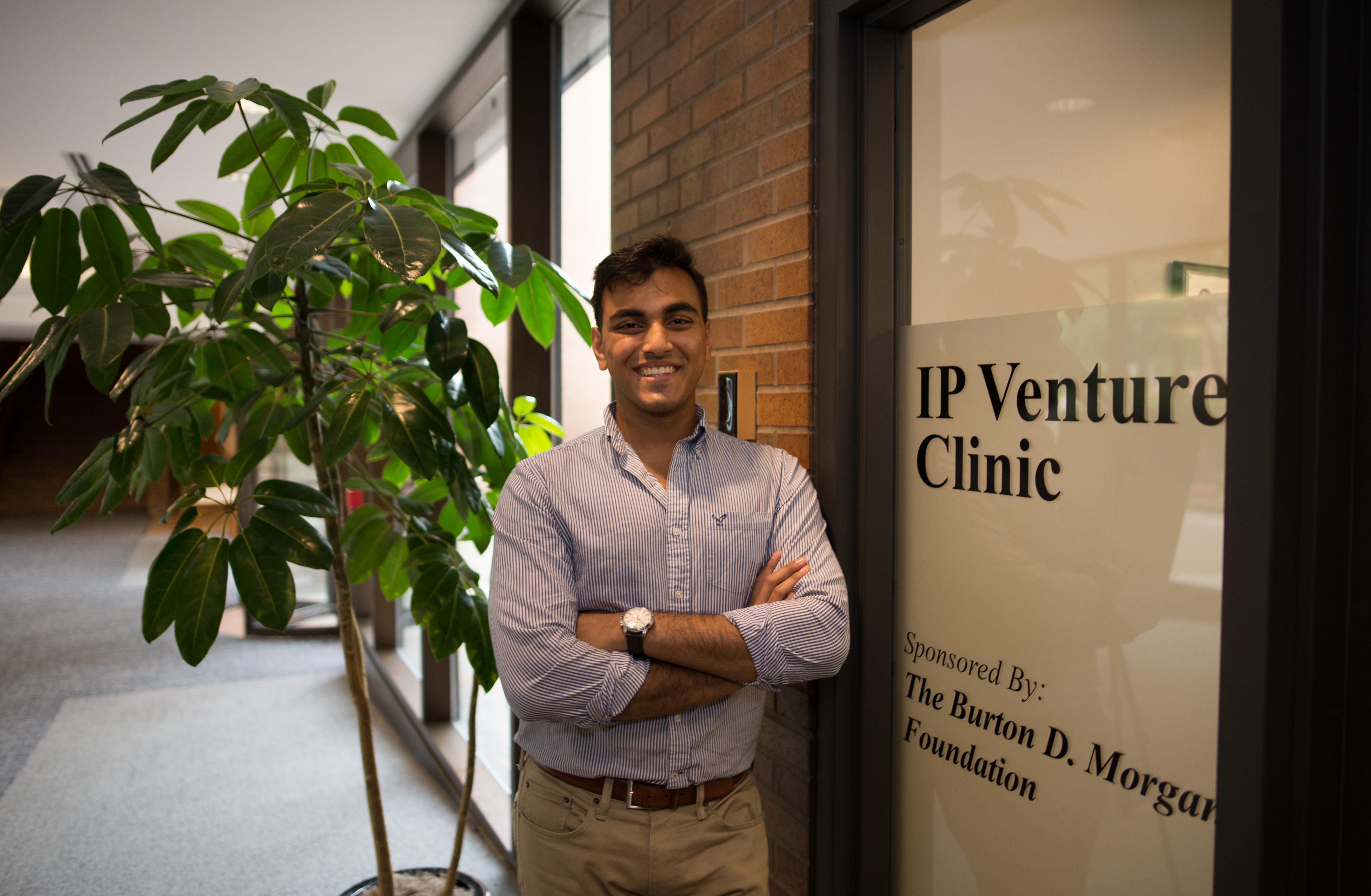 On paper, becoming an entrepreneur is simple.

“Find a problem and solve it,” said Prince Ghosh, the latest wunderkind to come from Case Western Reserve University’s School of Engineering. “If the problem is large enough and the solution is innovative enough, then you can offer something people didn’t think was possible. That’s when you have a business.”

Ghosh already found his problem to solve and, at just 20 years old, is working to create a solution with a potential multibillion-dollar global impact.

Growing up in New Jersey, Ghosh was a typical teenager. He played four years of varsity tennis, participated in the school’s robotics team and worked for a summer at Subway. Today, he is the founder of Boundary Labs, a company that is converting promising research with plasma into commercial applications in wind turbines and the aviation industry with help from Case Western Reserve University School of Law’s Intellectual Property Venture Clinic (IPVC).

His transition to an energy entrepreneur began two years ago while researching a project on chaos theory. Known in pop culture from movies like 'Jurassic Park’ and 'The Butterfly Effect’, Ghosh was drawn to a particular area of chaos theory stemming from his life-long interest in flight – turbulence.

Diving deeper into his research, he came across the work of George M. Zaslavsky, a Russian mathematical physicist who pioneered research in the 1960s on reducing turbulence by creating an electric field using plasma.

“The further I looked into it, something jumped out at me. No one had gone beyond the theoretical math and physics,” said Ghosh. “NASA and the University of Notre Dame had done some extensive research, but that’s where it stopped. I
decided to make a prototype.”

He spent the summer of 2017 in a lab working on a unique application based on Zaslavsky’s concept – a dielectric barrier discharge plasma actuator. In layman’s terms, he made a futuristic duct tape that could be retrofitted to an airplane wing or wind turbine blade and, when connected to power, ionize the surrounding turbulent air into a streamlined state.

By the end of the summer, his project was a success. Lab tests showed a four to six percent improvement in efficiency. That fall, he signed on as a client with the IPVC and launched his startup, Boundary Labs.

Help from the “HIDDEN GEM”

In 2013, the School of Law launched The Intellectual Property Venture Clinic with $50,000 in grant funding from Tarolli, Sundheim, Covell & Tummino LLP and a to-date total of $829,400 from the Burton D. Morgan Foundation. The
foundation’s grant is part of a large-scale effort to foster innovation and spur economic development in northeast Ohio, allowing the law school to not only provide one-of-akind training for law students in the business world but also
offer free legal and business expertise to student inventors and local startup companies as they enter the market.

“Boundary Labs is one of the dozens of clients the clinic has worked with since its inception, taking on promising inventors like Ghosh and helping them through the complex and expensive legal process of launching a company, filing
patents and eventually, taking on investors,” said Zahra Smith, the director of the IPVC. “We are working to remove the financial barriers that prevent many startups from ever reaching the stage of being a commercial property while
giving our law students significant experience in corporate and intellectual property law.”

For Ghosh and his three partners in the newly formed company Boundary Labs, the clinic’s services and the entrepreneur-friendly environment at the university played an essential role in converting his vision into a reality.

“Case has been so instrumental in our ability to start this company,” said Ghosh. “In the last year, I’ve talked to student entrepreneurs from universities around the world and they are shocked to hear about the resources that have been made available to us. The university’s progressive IP policy has allowed us to retain 100 percent of our intellectual property, even though our work was developed with help from faculty advisors and lab technicians who knew the intricacies of aerospace components, how to fabricate the adhesive and integrate the electronics so the system ran correctly.”

“The biggest hidden gem is the IPVC, by far,” Ghosh added. “No other school has something that does as much as the IPVC, and they do it for free.”

Over the next six months, law students Daniel Murray and Rodger Bramley worked closely with Boundary Labs as they began work setting up the business’s structure.

“It was a great experience for me,” said Murray. “I have an undergraduate degree in mechanical engineering and am going to work in IP law after graduating. Partnering with Boundary Labs, Rodger and I helped them work through the
legal issues that go with starting a business - performing due diligence, analyzing other existing inventions to formulate an IP strategy and filing provisional patents. We also provided full corporate legal services, helping set up an
operating agreement, ownership shares and cap tables. It was an incredible hands-on learning experience.”

“It was everything we needed to get started. Frankly, I would have had no idea how to set up otherwise,” said Ghosh. “Startups fail because they can’t afford the exorbitant legal fees of patent protection, facing them with the difficult
decision to take out personal lines of credit to front legal costs or not patent at all and risk having a company come in and steal their technology. The IPVC is a tremendous asset for us, lowering an otherwise high barrier of entry.”

For airlines in 2018, money spent on fuel makes up nearly a quarter of their annual operating costs at about $188 billion. Even a single percentage point improvement in efficiency could provide substantial savings in an industry that runs on razor-thin margins.

While the dielectric barrier discharge plasma actuator tape was initially conceived with commercial flight in mind, Ghosh was turned on to the idea of using his invention in the wind energy sector as well, where additional efficiency is no less critical to the bottom line.

Working with students in the university’s Institute for Smart, Secure and Connected Systems (ISSACS), Boundary Labs created a two-part solution to maximize energy output for energy producers in the wind sector.

“As we’ve gotten more and more familiar with the challenges faced by wind energy producers, we expanded our company’s initial scope,” said Ghosh. “Downtime for maintenance in wind turbines comes at a significant cost. Over time, turbine gearboxes wear down, so we created a low-cost sensor system that monitors vibration signals coming off gearboxes to aggregate data and predict the maintenance cycle needed to keep the turbines running, allowing for them to be serviced on low-wind days and not miss time when energy production is at its highest.”

Boundary Labs’ work with wind turbines is already underway, with beta testing beginning in June. Meanwhile, they are moving forward with the longer timeline of integrating their tape application in the aerospace industry, testing across weather conditions, power consumption and dozens of variables that need to be sorted out before the product can come to market. When the technology is close to being ready, they will turn to the IPVC again for help as they look to take on investors and hopefully fulfill the promise of the young company.

“You’re always moving so fast, so you never stop to think about it – the progress we’ve made from a year ago,” said Ghosh. “It can often be lonely to be an entrepreneur because every day something that you need to work is failing and the pressure is enormous. But I have a great team now and with the resources of the university behind us, anything is possible.”