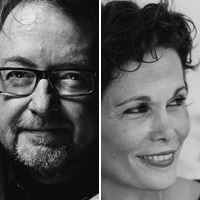 Mexican-American author Luís Alberto Urrea has written sixteen books, including the acclaimed novels The Hummingbird’s Daughter (2004), Into the Beautiful North (2009) and Queen of America (2011). His 2004 book, The Devil’s Highway (2004) – a nonfiction account of a group of Mexican immigrants lost in the Arizona desert – won the Lannan Literary Award and was a finalist for the Pulitzer Prize. Urrea’s latest book is the novel The House of Broken Angels (2018).

Dominican-American author Julia Alvarez is regarded as one of the most critically and commercially successful Latina writers of her time. Her novels include How the García Girls Lost Their Accents (1991), In the Time of Butterflies (1994), for which she was nominated for a National Book Critics Circle Award; and In the Name of Salomé, which Publishers Weekly called “one of the most politically moving novels of the past half century.” In 2013, Alvarez received a National Medal of Arts.