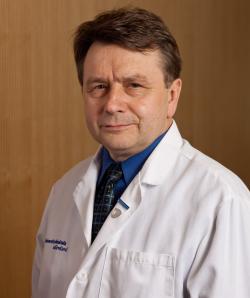 Dr. Safar discovered previously unknown forms of prions, which led to the findings of new prion diseases, better understanding of the conformation of prion proteins, and unraveling molecular mechanisms of prion strains. He invented the Conformation-Dependent Immunoassay (CDI) for detection, and Conformational Stability Assay (CSA) for differentiation of prions and prion-like proteins, including those causing Alzheimer’s disease, and synthesized the first artificial human prion. The new concept for detection prions and other misfolded proteins was patented internationally, and the CDI was validated for diagnosis of Creutzfeldt-Jacob Disease, and animal diseases (BSE, scrapie) in European Union.

After completing his residency, chief residency, and PhD training in Biochemistry, Dr. Safar received Research Fellowship in the Laboratory of Central Nervous System Studies at the National Institutes of Health (NIH), directed by D.C. Gajdusek (Nobel Prize for Medicine 1976). Here he demonstrated that the difference between the normal and pathogenic prion protein lies in the conformational transition, and he introduced a novel concept of the folding intermediate as a crucial stage in the prion formation. For this groundbreaking research, he received the National Institutes of Health Merit Award.

In 1996, he took a position of Senior Scientist at the Institute for Neurodegenerative Diseases, directed by Stanley B. Prusiner (Nobel Prize for Medicine 1997), and position of Associate Professor at the University of California at San Francisco (UCSF). He discovered new oligomeric forms of prions and led a team that developed a new concept for detection and differentiation of prions exploiting differences in their structural organization.

Safar Laboratory at the Department of Pathology offers graduate training in a wide range of projects in advanced neurobiology and neuroscience. The graduate program has a strong emphasis on cellular and molecular mechanisms of human neurodegenerative diseases such as Alzheimer’s, Frontotemporal dementia, and prion diseases. Training in neurobiology and neuroscience is provided through a combination of CWRU course work, research, and seminars.

Safar Lab has a leading expertise in the following areas:

Some reasons why you should consider our PhD program:

Cleveland is a graduate student friendly place, the cost of living is low, nice housing is very close to the university, and there are exciting activities at the university, in the city and in the surrounding area.

*More information and how and where to apply is in the link below:
https://case.edu/medicine/pathology/training/phd-program

The Molecular Basis of Age-Related Dementias

The goal of these studies is to delineate the impact of prion-like strains of amyloid beta and tau upon the AD phenotype in the context of specific risk genes using proteomic profiling of amyloid plaques, neurofibrillary tangles, glia, and neurons. This insight is critical for efforts to characterize key factors responsible for the very rapid rate of cognitive decline in some subtypes of AD and ultimately to novel therapeutic strategies to slow AD progression.

Dr. Safar is the author of 132 peer-reviewed papers, reviews, and book chapters encompassing a broad range of research in conformational protein chemistry, neuroscience, molecular biology, immunology, and neurodegeneration in humans and animal models. His paper in Nature Medicine is the most cited original work on prions published in the past 20 years (Safar J. et al., Nature Medicine 1998, cited 923-times; Institute for Scientific Information).