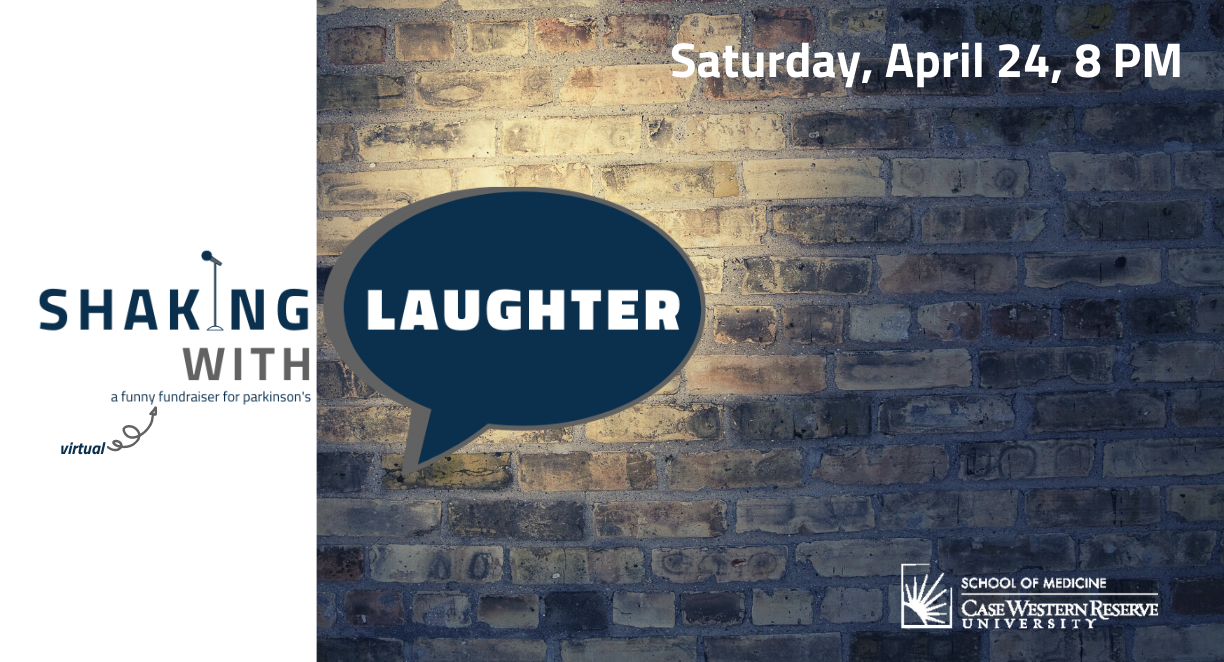 We are excited to announce and invite you to be part of Shaking with Laughter – A Virtually Funny Fundraiser for Parkinson’s Disease on April 24, 2021. Virtual guests of the event will enjoy a lineup of comedians and musicians headlined by the very funny and innovative Randy Rainbow with emcee Marc Jaffe, Shaking with Laughter founder.

If you cannot attend the event, you can donate through the ticket link on our registration site.

Proceeds from the event will support Parkinson's disease research at Case Western Reserve University School of Medicine, founder of the community-wide Cleveland Brain Health Initiative (CBHI) which brings together partner institutions devoted to finding new cures and ways to care for people suffering from brain-related diseases and disorders. This event will fund CBHI through established partnerships with the Jaffe Armsden Butler Endowed Fund for Parkinson’s Disease, established by Catherine Armsden and the late Lewis Butler, in honor of Karen Jaffe and her relentless pursuit of a cure for Parkinson’s disease. In addition, event proceeds will support the Meisel Family Foundation Fund in Parkinson’s Disease Research, which was established to support a community-based collaboration between CWRU and InMotion, a local organization that helps people with Parkinson's disease feel better every day.

If you would like to make an offline donation by check, please contact Tina Gerber at Tina.Gerber@case.edu or 216.368.5281.

You can participate even if you can't attend the event! The winner need not be present. Only 100 tickets are available. Don't miss your chance! The more tickets you purchase, the better your chances are! To purchase tickets and for more information, go to 2021-shaking-with-laughter.eventbrite.com and click on the tickets button.Win the Ultimate Pro Sports Fan Getaway for two! The package, valued at $2,700, includes:

Randy Rainbow is an American comedian, actor, singer, writer and satirist best known for his popular series of musical parodies and political spoofs, which have garnered him international acclaim. The influencer and Internet sensation’s viral comedy videos receive millions of views across all social media and digital platforms. Check out more about Randy on his website: randyrainbow.com

John Pizzarelli: John Pizzarelli is a world-renowned guitarist and singer who has been hailed by the Boston Globe for “reinvigorating the Great American Songbook and re-popularizing jazz.” The Toronto Star pegged him as “the genial genius of the guitar.” And the Seattle Times saluted him as “a rare entertainer of the old school.” Check out more about John on his website: johnpizzarelli.com

Wayne Cotter: Wayne Cotter is a veteran of the talk shows, having appeared dozens of times with both David Letterman and Jay Leno. A top nationally touring comedian, Wayne hosted the Fox Television Network series Comic Strip Live for many years, and has been nominated as “Best Standup Comedian” in the American Comedy Awards. Check out more about Wayne on his website: waynecotter.com

Moody McCarthy: Moody McCarthy has performed on Jimmy Kimmel Live, Conan, and the Letterman Show.  He’s also been featured on America’s Got Talent and Last Comic Standing, but gets asked more about his House Hunters episode. Check out more about Moody on his website: moodymccarthy.com

Tim Cavanagh: Tim Cavanagh is a favorite on the nationally syndicated BOB & TOM Show, Tim is a veteran headliner in comedy clubs across the country. Check out more about Tim on his website: timcav.com

Marc Jaffe: Marc Jaffe is not only the founder of Shaking with Laughter he was also a comedy writer and performer for many years. Marc has written for many top comedians from Garry Shandling to Paul Reiser and for many television shows, most notably Seinfeld.

Tickets: There are several ticket options to enjoy the event from the comfort of your own home. Tickets range in price from $50 to $200, with a post-event meet and greet experience with one of the performers for VIP ticket-holders and wine and appetizer plate thanks to Kendall-Jackson Wines and Chef Doug Katz available with two ticket levels. Ticket sales close on April 16. To purchase tickets for this event, please visit our registration site: 2021-shaking-with-laughter.eventbrite.com

Sponsorships: There are several sponsorship opportunities available to help contribute to the success of the event. Sponsorship support will not only underwrite the cost of the event, but will positively impact our work towards finding a cure for Parkinson’s disease. Please see below for additional information on our Parkinson’s disease research efforts. Sponsorship sales close on March 26. To partner with us on this exciting event, please visit our registration site: 2021-shaking-with-laughter.eventbrite.com

Thank you to our sponsors!

Thank you to our in-kind donors!

A Cure for Parkinson's Disease

Our Roots: Shaking with Laughter was founded in 2011 by Karen Jaffe, a prominent local OB/GYN, and her husband Marc, a well-known comedian and writer, after Karen was diagnosed with Parkinson's. The Jaffes’ goal was simple: support research focused on a cure for Parkinson’s disease by putting on one show and raising $20,000. That goal was wildly surpassed and the annual Shaking with Laughter event took on a life of its own. Friends and colleagues throughout the region looked forward to the light-hearted, entertaining event. It had all the necessary ingredients AND it supported research focused on a cure for Parkinson’s disease. In eight years, under the management of the Jaffes, Shaking with Laughter was able to raise nearly $1.2 million for Parkinson’s research. With its growth, it became apparent to the Jaffes that they needed a larger entity that shared their mission, to take over this event. In 2019, the Jaffes officially handed over the event to Case Western Reserve University School of Medicine.

Our Need: Parkinson's disease is a chronic, degenerative neurological disorder with symptoms that can progress from mild tremors to complete physical incapacitation. In the United States alone, 60,000 new cases of Parkinson's disease will be diagnosed this year. While the average age of onset is 60, an estimated five to 10 percent of people with Parkinson's disease experience onset at age 50 or younger. In its ongoing quest to develop significant symptomatic improvement and ultimately discover a cure, Case Western Reserve University School of Medicine established the Jaffe, Armsden, Butler Endowed Fund in Parkinson’s Disease Research Fund. In keeping with the Jaffes' original goal, the Shaking with Laughter proceeds designated to this fund will be used to prioritize research projects focused on a cure and dramatic symptom reduction for persons with this disease.

Our Science: Brain health is a primary concern the world over. From childhood disorders like autism, traumatic brain injuries in adolescents and young adults, to degenerative conditions like Alzheimer’s disease and Parkinson’s disease, no stage of life is immune to brain health concerns. Fortunately, Cleveland is home to some of the best and brightest researchers and physicians who work tirelessly toward solutions for brain health. Over many years, Case Western Reserve University School of Medicine has laid an extensive foundation for cooperation in pursuit of medical discoveries. Building upon this momentum, Case Western Reserve University formally established the Cleveland Brain Health Initiative (CBHI) in 2016, recruiting a talented faculty leader to serve as both Director of the CBHI and Chair of the School of Medicine’s Department of Neurosciences. With the school serving as the research hub and an established and growing list of accomplished clinical partners throughout the City of Cleveland and beyond, the CBHI is off to a promising start.

Shaking with Laughter is thankful for our event chair and host committee. We truly appreciate your support to help make this event a success!