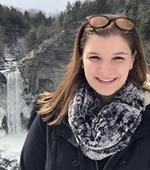 I’m originally from a small town in Upstate New York called Rome. I’m not sure when I began to realize the passion I had for science, but my earliest memory brings me to a second grade science fair. After that I was hooked. As I entered high school I quickly became more interested in biology and chemistry, leading me to Ithaca College to pursue a B.S. in biochemistry. I was drawn to Ithaca College by the environment in the science department which exuded support of research and encouragement of curiosity. It was there that I developed a love for research and an insatiable interest for exploring the unknown. Under the guidance of several of my professors I continued to cultivate my research skills and plan for the future, including a plan to apply to M.D./Ph.D. programs where I could turn my research inquisitiveness toward questions in medicine, specifically in the realm of cancer.