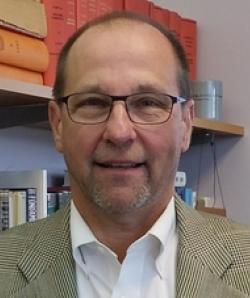 “…biology is largely the study of fibers…” wrote Joseph Needham in Order and Life in 1936.  Cells, tissues and organs rely on polymeric nanofibers as supporting structures, and thus polymeric fibrous scaffolds have a major role to play in the burgeoning fields of tissue engineering and regenerative medicine.  Also, cell interiors and surfaces are endowed with nanofibers (the cytoskeleton) which play key roles in defining mechanical properties and various important cellular functions.  For more than a decade, we have been involved in the development of electrostatic spinning (electrospinning) to create bio-mimicking fibers in a diameter range (ca. 20-100 nm) difficult to access by conventional fiber processing methods. We employ electrospinning as a method of fabrication of scaffolds for tissue engineering, drug delivery, and more recently the development of nanofiber constructs as models for functional biological systems.  Major intellectual questions focus on (1) the design of nanofiber scaffolds with multi-functionality (tunable mechanical properties, porosity, ability to deliver small molecule and/or macromolecular therapeutic agents, responsiveness to stimuli, programmed degradation) and their use in 3-D cell culturing and as a materials platform to support the regeneration of tissues in vivo, and (2) the prospect of designing and building functional biological systems such as muscle and nerve based upon an abiotic combination of nanofibers and appropriate colloids and gels that may at least crudely mimic the earliest examples of ‘life.’

A biofilm is a complex mixture of macromolecules that colonies of many types of bacteria and fungi generate and use great advantage for survival. Biofilms are notorious  in a wide variety of settings, from hospitals to industrial plants, and inhibition of their formation is major challenge. We are interested in the concept of a biofilm as a ‘macro-cell’ where the matrix is roughly viewed as a kind of protoplasm containing many individual cells.  Of particular interest is what functions the matrix serves to facilitate resistance of cell colonies to treatment by antibiotics and other chemical agents.   The state of water in and around biofilms is being studied using a variety of advanced imaging techniques to address this issue with the ultimate goal of gaining insight on how to effectively defeat biofilm formation and bacterial or fungal cell colony sustenance.  Sorption by the biofilm and partitioning of various external chemical species, specifically ions and small organic molecules, is also an area of interest.

We have helped to develop a new approach to 'lab-on-a-chip' microfluidic devices based on 2-D printing of hydrophilic paths on otherwise hydrophobic surfaces and bringing two such surface in close proximity without actual contact. Water will wet the hydrophilic paths and be drawn along them by capillary action, yet the sidewalls are in contact with air and thus the water channels are confined by the fluid's surface tension. An attractive feature of this approach is that all paths can be easily printed on inexpensive materials rather than inscribed as 3-D channels as is the case with conventional microfluidic devices. Another attribute is that reactive reagents can be 'spotted' along the paths by printing, affording a simple means to fabricate complex assay systems.