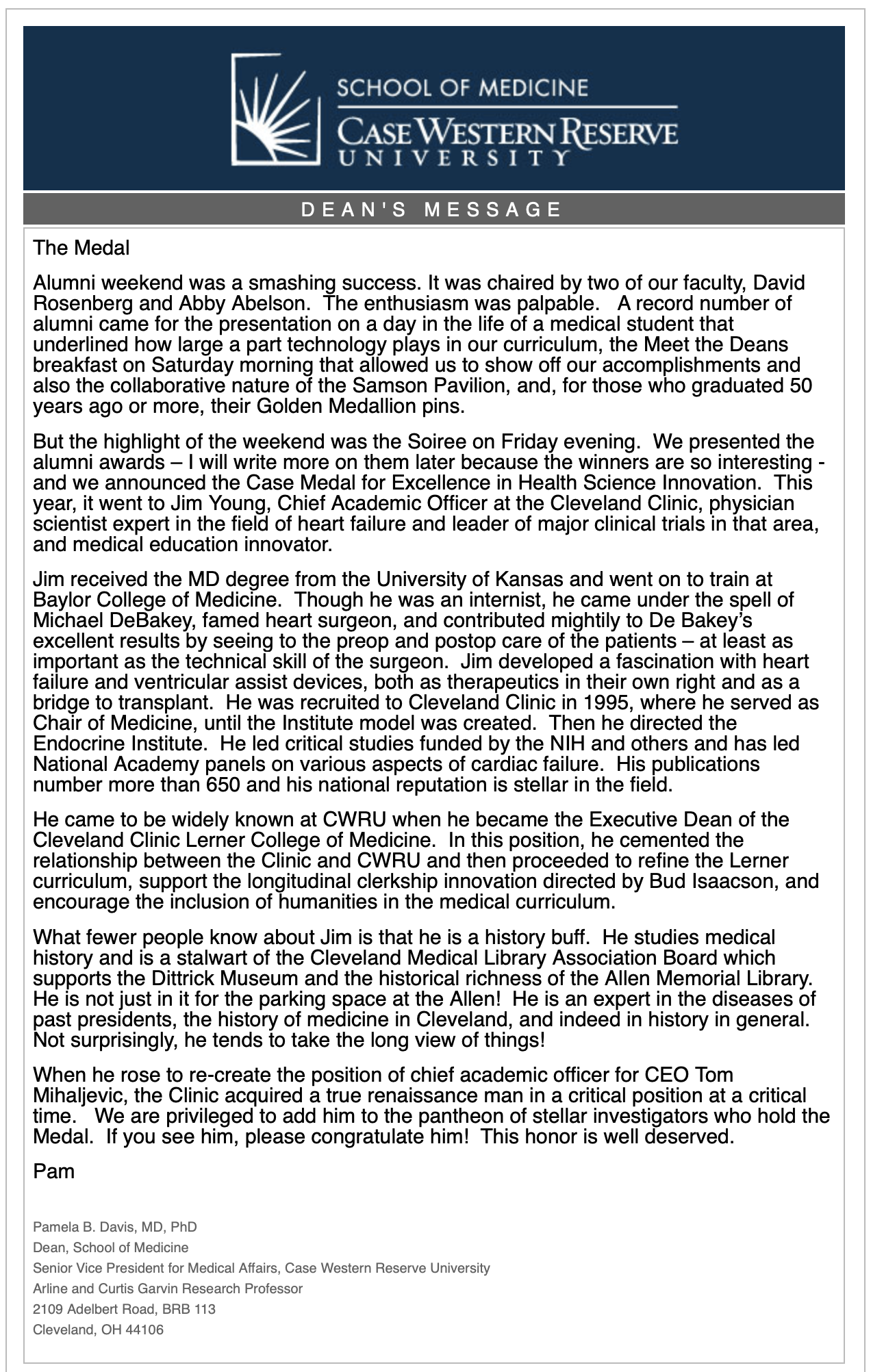 Alumni weekend was a smashing success. It was chaired by two of our faculty, David Rosenberg and Abby Abelson.  The enthusiasm was palpable.   A record number of alumni came for the presentation on a day in the life of a medical student that underlined how large a part technology plays in our curriculum, the Meet the Deans breakfast on Saturday morning that allowed us to show off our accomplishments and also the collaborative nature of the Samson Pavilion, and, for those who graduated 50 years ago or more, their Golden Medallion pins.

But the highlight of the weekend was the Soiree on Friday evening.  We presented the alumni awards – I will write more on them later because the winners are so interesting - and we announced the Case Medal for Excellence in Health Science Innovation.  This year, it went to Jim Young, Chief Academic Officer at the Cleveland Clinic, physician scientist expert in the field of heart failure and leader of major clinical trials in that area, and medical education innovator.

Jim received the MD degree from the University of Kansas and went on to train at Baylor College of Medicine.  Though he was an internist, he came under the spell of Michael DeBakey, famed heart surgeon, and contributed mightily to De Bakey’s excellent results by seeing to the preop and postop care of the patients – at least as important as the technical skill of the surgeon.  Jim developed a fascination with heart failure and ventricular assist devices, both as therapeutics in their own right and as a bridge to transplant.  He was recruited to Cleveland Clinic in 1995, where he served as Chair of Medicine, until the Institute model was created.  Then he directed the Endocrine Institute.  He led critical studies funded by the NIH and others and has led National Academy panels on various aspects of cardiac failure.  His publications number more than 650 and his national reputation is stellar in the field.

He came to be widely known at CWRU when he became the Executive Dean of the Cleveland Clinic Lerner College of Medicine.  In this position, he cemented the relationship between the Clinic and CWRU and then proceeded to refine the Lerner curriculum, support the longitudinal clerkship innovation directed by Bud Isaacson, and encourage the inclusion of humanities in the medical curriculum.

What fewer people know about Jim is that he is a history buff.  He studies medical history and is a stalwart of the Cleveland Medical Library Association Board which supports the Dittrick Museum and the historical richness of the Allen Memorial Library.  He is not just in it for the parking space at the Allen!  He is an expert in the diseases of past presidents, the history of medicine in Cleveland, and indeed in history in general.  Not surprisingly, he tends to take the long view of things!

When he rose to re-create the position of chief academic officer for CEO Tom Mihaljevic, the Clinic acquired a true renaissance man in a critical position at a critical time.   We are privileged to add him to the pantheon of stellar investigators who hold the Medal.  If you see him, please congratulate him!  This honor is well deserved.