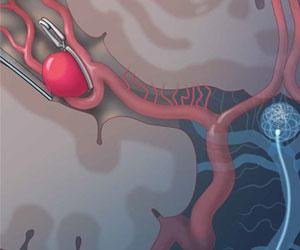 The Cerebrovascular Program provides diagnosis and treatment of patients suffering strokes as well as preventive medicine of cerebrovascular disease.

The sense of urgency and need for rapid treatment of these problems has been successfully integrated with EMS personnel, and primary and tertiary care providers, while increasing general awareness with the general public.

The treatment technologies are leveraged to enhance patient outcomes. Multiple imaging modalities are utilized, including noninvasive methods such as diffusion- and perfusion-weighted MRI, MRA/MRV, SPECT, and PET scans. Cerebral angiography is used diagnostically and therapeutically for the delivery of thrombolytic agents to dissolve occlusive clots. Endovascular techniques are used to place coils in inoperable cerebral aneurysms and to embolize arteriovenous malformations (AVM). Inoperable vascular malformations are treated with stereotactic radiosurgery performed with University Hospitals' Gamma Knife.

Despite many advances in endovascular therapy, conventional surgery remains the treatment of choice for many types of aneurysms and vascular malformations. Advanced monitoring capability makes surgery safer and more predictable than ever, and the experience and expertise of UH Case Medical Center neurosurgeons attracts patients from across the country and around the world. Intraoperative angiography allows us to view the results of excluding an aneurysm or AVM from the rest of the circulation as it is being done. Post-operatively, dilatation or "ballooning" areas of vasospasm after subarachnoid hemorrhage has become routine.We employ a highly collaborative and collegial relationship between neurosurgery and interventional neuroradiology, and we believe this team approach improves patient outcomes.

Department of Neurological Surgery's nationally recognized research program in cerebral metabolism was established under the direction of emeritus professor David Lust, MD, and continued through the work of Nicholas C. Bambakidis, MD.

The cerebral metabolism laboratory is dedicated to elucidating pathophysiology following a variety of neurological insults and developing novel strategies to minimize brain dysfunction and injury. This entails work on various aspects of experimental cerebrovascular disease to determine how these insults cause neurologic deficits, whether from cellular paralysis or cell death.

One major effort is centered on the mechanisms of damage following permanent focal ischemia, reversible focal ischemia and single versus multiple reversible ischemic events. These studies investigated the response of aged animals to focal ischemia. The laboratory examined events involved in the delayed death of certain neurons in the hippocampus following periods of global ischemia compatible with survival as well as the relationship between prenatal metabolic stress and neonatal brain function, which has been implicated in the evolution of cerebral palsy.

Experimental projects on the pathophysiology of spinal cord trauma are underway, and studies following head injury indicate a long-term effect on the metabolic processes in both ipsilateral and contralateral hemispheres. The cerebrovascular laboratory continues to add new techniques to broaden its approach to the study of stroke.