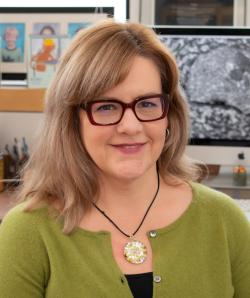 Our laboratory investigates the development of neural circuits. In particular, we study molecular mechanisms controlling neuronal communication in Drosophila. We combine genetic, cellular and electrophysiological approaches in this powerful model system to analyze the interaction of neurons with their environment during development. Extracellular signaling pathways regulate core attributes of neuronal identity—from neuronal survival to process outgrowth and synaptic function. Furthermore, aberrant intercellular signaling is a common feature of neurodevelopmental disorders.

Research in the Broihier lab focuses upon two major questions:

1. How are morphogenetic signaling pathways specialized for nervous system function?

The same extracellular signaling pathways that play widespread roles throughout the body also regulate neuronal development. Neurons present a unique set of challenges for these pathways, as they are electrically active and have elaborate polarized morphologies. We are interested in the molecular mechanisms that customize TGFb/BMP signaling for the nervous system.

We have identified the evolutionarily conserved transmembrane protein, "Crimpy," as a novel regulator of BMP signaling in neurons. Our work demonstrates that Crimpy is required for both presynaptic localization and activity-dependent release of presynaptic BMP at the neuromuscular junction. We are currently analyzing the molecular mechanism by which Crimpy controls presynaptic BMP activity. BMPs are neuromodulators in the mammalian brain and dysregulated BMP signaling is linked to major psychiatric disorders—making molecular characterization of this pathway significant.

2. How is the activity of individual transcription factors shaped by extracellular signals?

Transcription factors establish and maintain neuronal cell fates in development and adulthood. Some are expressed only transiently, as they function exclusively to initiate comprehensive gene expression programs. Others, however, have sustained expression profiles, pointing to ongoing requirements in modulating neuronal characteristics.

We study the role of the FoxO transcription factor in neuronal survival, morphology and plasticity. FoxO proteins integrate developmental and environmental cues in many cell types, and are important emerging regulators of neuronal development. We have found that FoxO is expressed in developing and adult Drosophila neurons and that FoxO activity is profoundly influenced by neurotrophic signaling pathways. We are currently dissecting the signal transduction pathways that couple FoxO activity to extracellular signals in both motor and sensory neurons. Neurotrophic signaling networks are key to neuronal survival and function, making elucidation of the downstream molecular cascades important.